by Emmy Griffiths Published on 26 January 2015 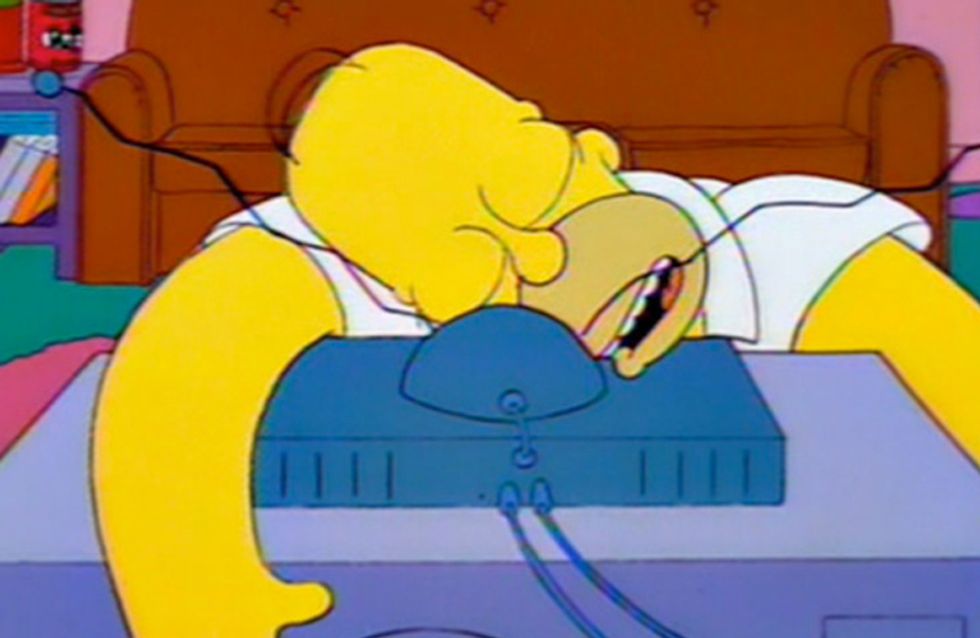 Do you spend more time glued to your sofa than the cast of Gogglebox? Does keeping up-to-date with your favourite shows require careful planning and attention to detail? If so, you may well be addicted to the screen. Here are all the signs that you’re a total TV addict…

1. You need to write down all of the shows you watch to remind yourself

Breaking Bad, House of Cards, The Wire…Oh! Don’t forget to catch up on Scandal. And your colleague said How To Get Away With Murder was good, so try that out. Actually, let's just write out a schedule to keep ourselves up-to-date.

2. You occasionally forget that characters on TV are not, in fact, real people

“If Serena had just acted like a grown-up and stuck around for Dan’s explanation then she would never have gotten herself into this situation!” - Every Gossip Girl fan ever.

3. Going without television for a few days means a glorious binge watching session

Those two weeks in on holiday were great, sure. Beaches are nice. But what is even NICER are the back-to-back episodes of EVERYTHING you have to watch when you get home!

4. Speaking of which, Netflix is your God

Whoever thought of having episode after episode of your favourite show delivered to you, literally without you even needing to move is an absolute HERO. The only terrible thing about Netflix is when you finally manage to catch up.

5. You have seen every crime show that is going

You know the key differences between The Fall, The Missing, The Bridge and The Killing. Basically anything that sounds ominous with a 'The' in the title.

6. You have fan meltdowns over the shows that mean the most to you

No one was okay after The Red Wedding or Downton Abbey's season 3 Christmas Special, but you were BEYOND that.

7. You’re also love finding those shows no one else has picked up on yet.

Shout out to all those Breaking Bad fans in the UK circa 2008! Little art house series, shows that haven't aired in your country yet, old school Netflix shows of long-cancelled or finished shows, you love watching that handful of shows that you feel you have all to yourself.

8. There’s nothing like the sweet agony of waiting a week for the next episode to air

9. You NEED teaser trailers for a new season

You've gone months, MONTHS, with not a single hint of your characters fate. Teasers are there to be analysed!

10. Buffering is a major, major issue that must be rectified. By the government.

There's nothing so annoying at truly enjoying a joy only to have it ripped away from you by that hateful loading icon of doom.

11. You will literally get sucked into anything that a friend makes you watch

If the world likes it, that means you'll like it. Whether it's drama, comedy, or just tacky, tacky trash TV, let yourself watch it and you can't stop!

12. The death of your favourite character will literally affect your day

No I don't want to talk about it, I just want to be left alone and allowed to grieve.

13. You’re subscribed to at least one streaming service

Netflix, NOW TV, LoveFilm, Blinkbox - it's all good! They're our friends. They help us.

14. Nothing is worse than it being four in the morning, knowing you need to call it a night, then the episode ending on a cliffhanger

15. You feel extremely uncomfortable when your optician asks how long you spend looking at screens everyday.

“Erm…minus sleeping that’d be about…18 hours a day?

16. There is a certain satisfaction in knowing every single television reference

17. Other people enjoying your recommendations is one of life's greatest joys

As is knowing what they have to come. They are going to LOVE season 3!