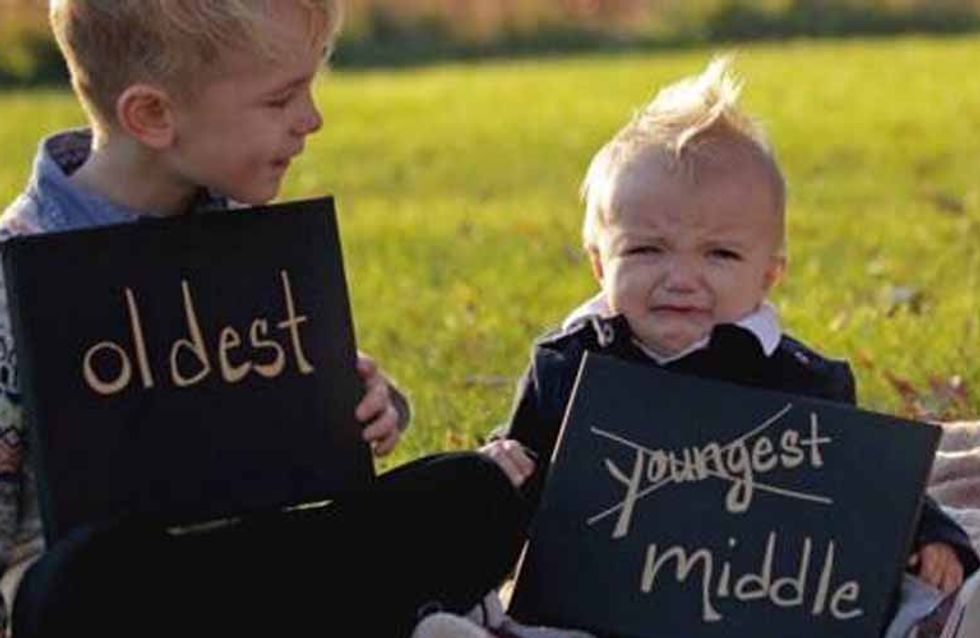 It's tough for the kids stuck in the middle. You're not the revered first born, nor are you the precious baby, leaving you in a strange purgatory where you're constantly called by your siblings names and forgotten on a regular basis. Good thing we have a sense of humour about all of these middle child problems...

Since your parents are so busy worrying about your older sibling's life plan and your younger sibling's homework, it leaves you trying to tell them where YOU'RE going rather than the other way round.

2. You are forgotten about on a regular basis

Kevin from Home Alone is the middle child. Just saying.

3. Seriously, your Dad goes through every family member, the menagerie of pets and your next door neighbours before he gets to yours

"Pass me the milk Will-Nathan-Dawn-Marmite-Florence-Goldfish #3..."

4. Your rebellious attempts are blocked at every turn

Your brother did it so your parents know to NEVER let you do the same!

5. Your younger sibling gets EVERYTHING

Life has never been so sweet for them and so bitter for you after a trip to Toys R Us.

6. You had a healthy knowledge of everything from smoking to the Tweenies growing up

Hanging with your older and younger siblings gave you the key skills to be cool and/or be able to discuss cartoon characters as if they're real people. And since watching television is so much easier than trying not to care if your older sibling's friends think you're cool, looks like you'll have every episode of Bear in the Big Blue House memorised in no time.

7. You get second dibs on everything

You get the hand-me-downs but by the time it's your little sibling's turn, that gear has been worn to SHREDS. You will also get all the yellow sweets, the Bounty in the box of Celebrations and only be able to play Crash Bandicoot after your other sibling has already completed it. THANKS LIFE.

8. You always get stuck in the middle during an argument

The older one is a quick-tempered buffoon and the younger one is utterly tactless. Wars are declared and you are expected to be SOMEONE's right-hand-man. But picking means having shade thrown at you for MONTHS. There's is no tactical advantage here. You're screwed.

9. Your older sibling always gets the (highly misplaced) responsibility

You know you’re the responsible one, and yet THEY are given the food cash when your parents go away on holiday, which is then promptly used to buy booze whilst you would have bought some spaghetti bolognese ingredients and put the rest into a sensible low-yield bond.

10. Your sibling’s achievements will always trump yours

It doesn't matter if you're a brain surgeon with a double First degree and a Pride of Britain award for saving all of those unloved yet adorable puppies. Your sister just won Star Pupil of the week!

Apparently my mom cried when she dropped my sister off her freshman year. Her eyes were awfully dry this time around. #middlechildproblems

11. You're nicer to your younger sibling

Since you've been the one fetching glasses of squash so you can have your ten minute turn on the computer, had to deal with your older sibling utilising the TV, computer and Playstation ALL AT THE SAME TIME, you know how the little one feels more than your parents ever could. This means that you occasionally make the effort to be nice to your younger sibling, leaving them generally feeling confused and suspicious.

12. You are slightly crazy

This is why all middle children do drama. If you never did drama, you should have.

Sitting across from a little girl at the airport screaming "hey everybody at this table! I wanna tell you something!" #middlechildproblems.

13. You are always expected to help

They couldn't force the older one to empty the dishwasher if they tried, and the younger one is far too small to push around a vacuum cleaner. It's fine though because you're here, right? RIGHT?!

14. You are always left out

15. You are pretty independent

Because your parents are so busy taking care of your siblings' ridiculous lives, you are pretty self sufficient.

16. You act as Peacemaker

Since you're in both shoes as the younger and older sibling, it gives you the unique advantage of settling arguments between the two extremes on either side.

17. You learned life isn’t fair at an unusually early age

Since you naturally measure everything you ever receive against your older sibling, obviously sometimes inconsistencies fall through. Especially when your younger one comes along and gets more presents than you can swing a stick at. Where's the justice in this crazy mixed up world?!

18. You’re to blame for everything

The older one is too busy and the younger one doesn't know any better. YOU ON THE OTHER HAND.

We feel your pain, little baby