Men up and down the country are on high alert – Cheryl Cole is single again. The Girls Aloud star reportedly split with her boyfriend of one year Tre Holloway. Allegedly it was the distance that led to the breakup, with LA-based Tre refusing to move to the UK and the Geordie singer reluctant to uproot to America.

Cheryl Cole is back on the market after breaking up with her backing dancer boyfriend Tre Holloway, her spokesman confirms.

It’s said that the pair split back in the summer, but still remain friends after parting on good terms – unlike Cheryl and a certain Premier League footballer…

“Cheryl and Tre had a brilliant year together but the pressures of long-distance dating eventually became too much,” an insider told 3am.

“Although Cheryl does a lot of work in America, often it is in New York, which is still a good six-hour flight away. The time difference, plus the hectic nature of Cheryl’s working schedule, eventually took their toll.”

“Cheryl realised that if they weren’t going to live together, realistically, the relationship, just wasn’t going to go anywhere.”

Although many thought marriage was on the cards for the pair, The Fight For This Love singer was said to be reluctant to leave the UK and Tre refused to move to the UK permanently.

The source continued: ““Despite splitting up in the summer, they met up for dinner last week just as mates and they had a great time.”

“They remain incredibly fond of one another and their families are also still very close and in regular contact.”

Tre and Cheryl met after he was enlisted as one of the backing dancers on her solo UK tour, and he was the Call On Me singer’s first serious boyfriend since her split with love rat Ashley Cole in 2010.

But it looks like travelling between Los Angeles, New York, London and Cheryl’s native Newcastle was just too much for the pair to cope with.

Still Cheryl’s not at home crying with her beloved dogs Buster and Coco.

Reportedly Cheryl’s mother and friends have rallied round the unlucky-in-love star, and most recently she went on a wild weekend in Amsterdam with her Girls Aloud BFFs Nicola Roberts and Kimberley Walsh.

Are you sad that Cheryl and Tre have split? Tweet us @SofeminineUK! 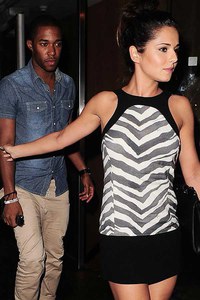 Alison Potter
…
break-up
For all the best videos, memes and shareable news!