by Rose Adams Published on 12 September 2016

When you think of relationship goals, a few things come to mind: travelling the world together, finishing each other's sentences, banter off the scale and John Legend and Chrissy Teigen of course. Whether it's jetting off on romantic holidays together, cute tributes on Instagram, or generally just being adorable on the red carpet, even the most cynical of us can't deny these two are crazy in love.

We majorly heart long term lovebirds John Legend and Chrissy Teigen. Both equally good looking and talented, although they may have travelled down very different career paths - John in singing and Chrissy in modelling, beginning her career as a Sports Illustrated cover girl - their road to finding true love was very much in sync. Aw.

They first met where all average love stories begin, y'know, on the set of John's 2007 music video Stereo. Chrissy was cast as his love interest in the vid, and as it often does, scripted reality turned into actual reality and they fell in love. Living happily ever after, the couple married in 2013 in Lake Como in Italy.

If these two haven't restored our faith in romance, nothing will - I mean, who else could look this loved up sharing a greasy bargain bucket?

The pair first expanded their brood as most couples do, with some canine friends in the form of slobbery mutts Puddy the Bulldog, Pippa the Frenchie, and Penny the three-legged Frenchie, before it was time to bring another beautiful human into the Stephens household. That new addition to the family was gorgeous daughter Luna Simone and much to our delight, the pair can't resist showing her off. Just LOOK at her.

Yup, these two are crazy in love and don't care who knows it - remember when John penned soppy love track 'All Of Me' about Chrissy, and she starred (naked) in the music vid? Of course you do, cos we're all out here still waiting for this to happen to us. Here's their love story in pics starting right from the beginning in 2007 where it all began. *Swoon* 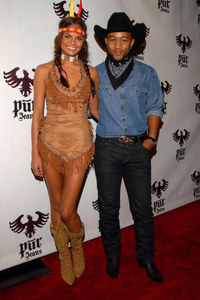 ​*googles music video castings to find our own John*.

Do you love Chrissy Teigen and John Legend as much as we do? Let us know @SofeminineUK!

7 Reasons Why Chrissy Teigen & John Legend Will Be The BEST Parents!

Rose Adams
…
For all the best videos, memes and shareable news!