by Emmy Griffiths Published on 12 February 2015 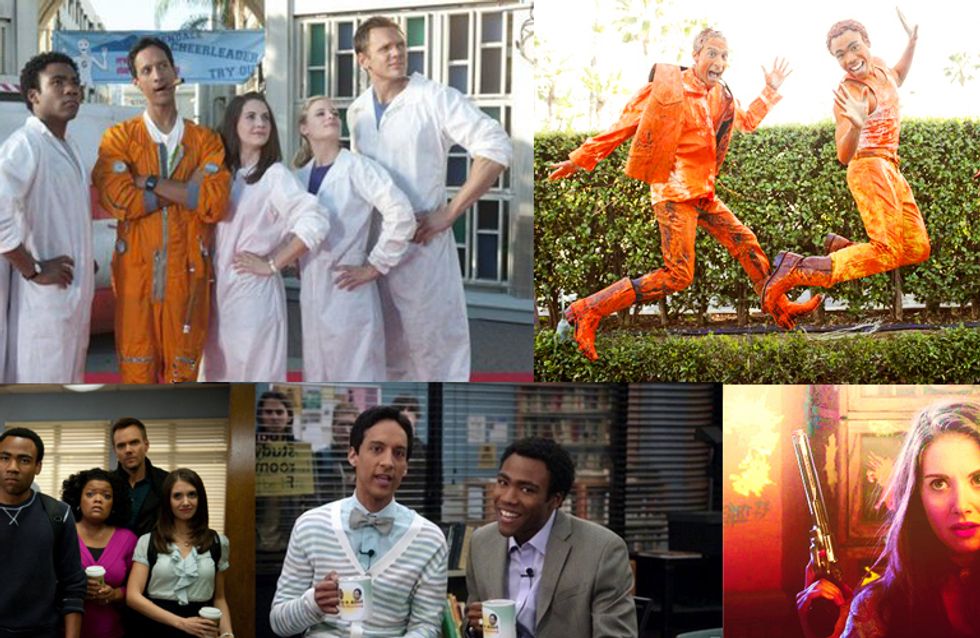 For everyone that saw a new show join the ranks of Breaking Bad, Arrested Development and Suits on Netflix last week and haven’t quite been bothered to watch it yet (especially when you still have those final five House of Cards episodes ready and waiting), we’re here to clue you in on why you DEFINITELY need to hurry up and binge watch then newest comedy to come to Netflix, Community…

The ensemble cast of The Study Group

The series centres around seven misfit students who form a study group at their frankly ridiculous community college, and you will love them all like family members before the first season is over.

The lead, Jeff, is a God among men

With his chiselled jaw, swaggering confidence and sarcastic quips, Jeff is the reluctant natural born leader of your dreams. Not to mention his speeches. Oh, his speeches.

Despite Jeff and Britta starting out as the ‘will they won’t they’ couple, Annie has had a bit of a thing for Jeff from the off and, if you’re anything like us, you’ll be fixated on whether the pair are actually hooking up.

Troy and Abed are the man child BFFs of our dreams. They understand each other like no one else does, they have a dreamatorium where they play (no, sorry, share a virtual reality) together. They also rap, have a (fake) morning show, prank the rest of the group and generally have the most beautiful friendship we’ve ever seen (besides a brief fight during constructing a pillow fort…those were dark times).

The Dean. Oh my God, the Dean

As the headmaster of the school, the Dean loves dressing up, has a Dalmatian fetish, uses his name as a pun for everything and a deep lust for Jeff. You look forward to every moment he is on the screen because you KNOW whatever happens is going to be good. Fun fact: actor Jim Rash is an Oscar-winning screenwriter!

Senor Chang is everything

Chang is the study group’s Spanish teacher, played by Ken Jeong. To summarise his character: he is totally batsh*t and the show would NOT be the same without him!

There are SO many little jokes

We don't want to spoil them all, but there are some tiny little tidbits that, if you notice it, are simply brilliant. Here's our personal favourite...

You’ll either hate or love Pierce

Pierce, played by SNL legend Chevy Chase, is the older guy of the group, often turned into the antagonist and portrayed as a man who thinks he’s a cool ladies man and is stuck in his old ways. Whilst some will hate him, some will LOVE him. Which side do you choose?

Although most episodes show the study groups having a normal (albeit weird) day at school, sometimes the writers of the show decide to ignore every rule in the book and just go ahead and make something spectacular. Paying homage to Pulp Fiction, Apollo 13, Star Wars, Glee and Law and Order and many, many more, if you love pop culture this series was made for you!

It’s Halloween and Christmas episodes are the BEST

From zombies to Claymation, Community always knows how to do every show’s typical Halloween and Christmas specials right.

Season four is the utter worst

Creator, showrunner and all-around genius Dan Harmon was fired from the show after season three, with the cast and Dan himself openly unhappy with the decision. What followed in season four was a horrible, cheap knock-off version of the show, with season four being full of failed gags desperately attempting to recreate Dan Harmon’s unique wit but falling flat.

When Harmon was invited back to write again for season five, the show immediately picked back up, with a few gags thrown in that last year they all suffered the effects of a ‘gas leak.’ If you want our advice? Skip the whole thing.

There is a running joke among fans that Community has to last six seasons and a movie. When the show was cancelled after season five (and subsequently picked up by Yahoo for season 6), fans adopted this mantra as it’s motto to keep the show alive, sprouting Facebook pages, Tumblr accounts and trending the hashtag in attempts to save the show.

You’ll binge watch it in NO time

Each episode is only around 20 minutes long and since Netflix will be feeding you episode after episode, you’ll be caught up-to-date (and will have had the best week of your life) by the time you get through it all and trust us, you will love it!

Are you going to start watching the show? Tweet us @sofeminineUK!

This was written by Emmy Griffiths. Tweet her about Community @emmyfg!

25 Jokes Only Lord of the Rings Fans Will Find Funny