If you are anything like us, we know that upon reading this headline you shrieked, your heart skipped several beats and you slurped your tea all over yourself. So before you proceed, please have a little sit down, make yourself another cuppa and think happy thoughts. Because remember, everything could be okay…he might not leave One Direction…though apparently Harry Styles’ new relationship with Kendall Jenner is making people very worried that he will.

Harry Styles and Kendall Jenner have been very snuggly as of late – going on skiing trips, dinner dates and hiding out in her dad’s beach house for days on end – but fears are beginning to emerge that Kendall’s mother Kris Jenner will influence Harry to leave the good ship One Direction behind in search of new lands. Don’t do it Hazza!

According to Now magazine, Harry’s high profile relationship is causing friction with his fellow band mates – Liam Payne, Niall Horan, Zayn Malik and Louis Tomlinson, who are worried that Harry might decide to go solo. 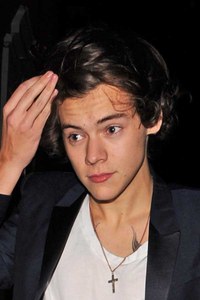 Apparently Kris is seriously keen for Harry to appear on reality TV show Keeping Up with the Kardashians with her daughter Kendall, as a source told Grazia: “Kris has always seen her children’s relationships as business opportunities, so she wants him on the show.

“She insisted Kendall talk to him about it and has also made inroads, explaining what a great opportunity it would be for him.”

It sounds like the 19-year-old was initially reluctant at the idea, but has started to be talked around.

“Kris pointed out how Kanye was reluctant to do it, which has certainly influenced Harry. He has a lot of respect for Kanye. Harry is now considering making a small appearance, perhaps just in one episode.”

It doesn’t sound like this idea has gone down well with the rest of 1D though. Another source claimed: “Some of the boys are concerned that Harry’s stealing the spotlight with yet another celeb romance, but they’re also furious about Kris meddling in band matters.

They’re worried she’s slowly trying to get him to quit. It’s no secret Kris is the mastermind behind her daughters’ success and financial empire. She has endless contacts and a lot of clout – two things that could really help Harry launch his own career.”

Gulp. No one should panic though, as Simon Cowell is one step ahead of us all, as per usual. Apparently the band have signed a contract ensuring they’ll stay together for years, and if one of them walks out all five will miss out on the payout.”

Harry wouldn’t do that, right? Right?!