Cressida Bonas reportedly spent the weekend at Sandringham, and apparently has been given the royal seal of approval. The 24-year-old was invited to a shoot on the Queen’s estate with the Royal Family's favourite redhead Prince Harry, spending the weekend at the 20,000-acre Norfolk estate whilst the Queen was in London.

Prince William has found his Princess and they are currently living happily ever after, so it’s time to get our next favourite Prince settled, and apparently Harry is well on the way!

Cressida Bonas, Prince Harry’s girlfriend, has reportedly been given the royal seal of approval after spending the weekend hunting at Sandringham.

This invite isn’t given to just anyone, and sources say it could be a sign that the Royals see Cressy as Harry’s potential future wife.

​One source told The Sun: “Harry has an extremely demanding role in the military and it’s the perfect place for him to unwind with those he dearly wants to be around.

“Cressie has been given the Royal seal of approval. Of that there is no doubt. Harry is smitten and treats her like a princess.”

Despite reports that Kate Middleton was not overly fond of Harry’s new girlfriend, it was also reported that Cressie was invited to the christening of baby Prince George last week and that Will and Kate are “fond” of the blonde socialite.

Although Cressida and Harry eventually decided her presence may stolen the thunder from the baby’s big day, the significance of her invite is palpable.

“Will and Kate have grown very fond of Cressie and the time was right to move things forward in terms of protocol”, a well-placed source says.

“The Christening was tricky. No one wanted a situation where Cressie’s presence may have diverted attention away from Prince George.”

Along with reports that Harry is ready to settle down, and Cressida has gotten used to the idea of a Royal life (yes, we hear it’s really hard, so many Charity Balls), it's likely that we will be seeing more of the socialite.

“Considering Harry’s age and this very significant step, the feeling is this relationship is very special indeed," the source added.

"The Royal Family are more guarded than ever. But the public will soon start seeing Cressie with Harry more and more often, albeit within a controlled environment."

We can’t wait to see more of her! So many Princesses nowadays, so little time!

Are you a fan of Cressie? Tweet us @SofeminineUK 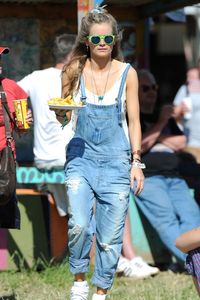