Since Prince Harry showed that he was pretty serious about his girlfriend Cressida Bonas after taking her to Sandringham Estate for the weekend earlier this year, we all started paying attention to the couple whilst wedding bells rang in our ears and we tentatively started checking what sort of bouquet would best compliment Cressie’s complexion. However, any dreams of them exchanging Christmas presents on the 25th have been shattered as the two of them will be spending Christmas apart!

Prince Harry isn’t going to be spending Christmas Day with Cressida Bonas, and we are disappointed.
​
The two of them have been getting increasingly more serious this year, with Prince Harry introducing his 24-year-old girlfriend into the Royal fold after treating her to a weekend at the Royal estate in Sandringham. 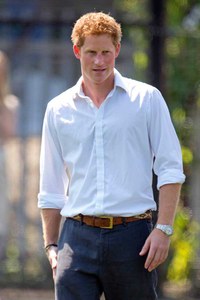 The young socialite has also apparently become very pally with everyone’s favourite Duchess of Cambridge Kate Middleton, so we were excited to think that Cressida might be have been invited along to Kate’s exciting Christmas that she has planned for the Middletons and the Royals.
However, it sounds like Prince Harry – who has gotten back from his charity trek to the South Pole just in time to celebrate Christmas with his family – will be spending Christmas at Sandringham, and it doesn’t sound like Cressie has been invited as an insider told The Telegraph: “Cressida will be with her family for Christmas”.

A courtier said: “His Royal Highness knows that it would not be appropriate for Miss Bonas to join the Royal family for Christmas until they are a married couple.”

That makes sense…we guess…however, the two of them are planning to go to South Africa for the wedding of her half-sister Isabella Calthorpe and Sir Richard Branson’s son Sam, and there is speculation that the two of them will be revisiting the slopes in Switzerland, so that's something!

He’s going to have to find some time for her somewhere anyway! First the South Pole, then Christmas – why must he insist on being away from her for so long!

We know that the two of them are getting a little more serious as Harry has also met Cressida’s father, sparking rumours that he might be ready to pop the question.

However, not all of the dancer’s family are on board for the couple’s possible engagement, as her brother Jacobi Anstruther-Gough-Calthorpe said: "I think on some level it is different to any other type of fame. It's just an invasion of privacy, which is hard.

“I mean, there are people who court that, and it's a different mentality. But when you're not, and you have to spend your life hiding from it, I think that becomes very exhausting and quite hard work.

Ah, stop being a killjoy Jacobi! They may not be spending Christmas together, but we think that 2014 is going to be a big year for the couple!

Do you think they should be spending the holidays together? Tweet us @sofeminineUK