by Stephanie Ashley Published on 3 February 2014 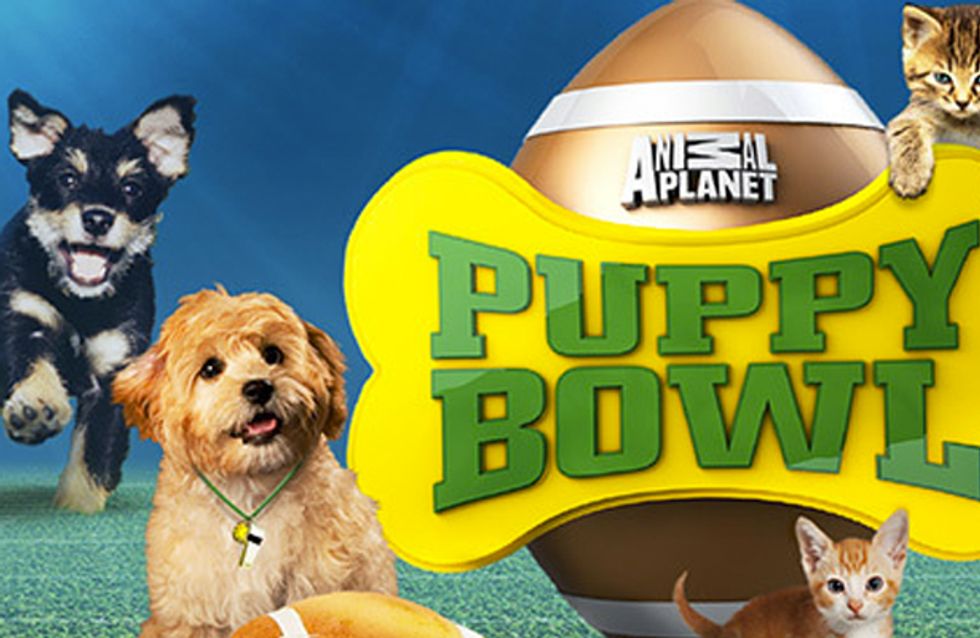 Do you love all things cute and cuddly? Then the Puppy Bowl is just your cup of tea. Every year, Animal Planet hosts the Puppy Bowl, where adoptable puppies take the tiny field to play around and have fun. This year, they took their game to a whole new level with penguin cheerleaders, affectionately dubbed “Penguin-leaders,” and a kitty halftime show. Missed it? Not to worry, we’ve got all the cutest moments from Puppy Bowl X!

If football isn’t really your thing, but you’re a major fan of animals, then Animal Planet has you covered with the annual Puppy Bowl! Every year on Super Bowl Sunday, Animal Planet offers alternative entertainment, in the form of dozens of adoptable puppies running around with chew toys on a miniature football field.

Still not impressed? This year, at Puppy Bowl X, the pups were cheered on by some feathered friends: the Penguin-leaders, and for your halftime entertainment, kittens stormed the field with confetti!

If you missed the show, or just want to relive all that cuteness, we’ve got all the best moments and adorable faces from this year’s Puppy Bowl!

The puppies take the field and show off their amazing feats of athleticism!

Unlike those humans, these pups know how to play some football. Look at this one pull a sneak play!

Some of the players got a little rough…

Or just couldn’t stick to the rules. (Paws out of the water bowl, Ginger!)

So the ref had to step in and call for order. (You just wish you had this guy’s job!)

But this is the Puppy Bowl, so order didn’t last long!

This year featured some very special guest cheerleaders. (Does that qualify as cheerleading?)

And a killer Halftime show, complete with kitties and confetti.

We even got to see some special guest appearances by internet sensations like Keyboard Cat…..

And the kitty with the cutest tongue: Lil Bub!

When all was said and done, these dogs rocked. Fans even voted this little guy into the Puppy Bowl Hall of Fame.

All the puppies and kittens in this year’s Puppy Bowl X came from local animal shelters and are all adoptable! Don’t you want to share in the cuteness?

Did you watch Puppy Bowl X? Tweet us @wewomenUSA.