Kelly Brook has been dealing with the humiliating news that her boyfriend Danny Cipriani has been cheating on her with various different women. But instead of sitting on the sofa eating ice cream, this lovely lady went out on a good old fashion girls’ night.

Kelly Brook was spotted enjoying a girls’ night out with her famous pals Myleene Klass and Katherine Jenkins at the weekend.

Kelly dumped her boyfriend after news broke that he had been secretly sexting as many as six women while they were together.

But last night he appeared to be out of her mind once and for all as she treated herself to a night on the tiles with friends.

The group were spotted at Mahiki in West London and treated themselves to the nightclub's famous treasure chest drinks.

Katherine and Kelly both posted snaps of themselves to Instagram, with the singer captioning one: "Girlie night".

The Sun alleged that the rugby ace confessed to his sins and said: "I can’t believe what I’ve done."

Kelly was snapped looking sad and troubled the day after her fight with Danny, which came soon after they returned from a romantic holiday in Turkey.

Danny is said to have sent dirty texts and photos to 25-year-old Stacey Simcox, even when Kelly was nursing him back to health after he was hit by a double-decker bus.

A friend of the sportsman told The Sun: "Danny is absolutely devastated. He just can’t believe what he’s done - he just wants Kelly back."

Kelly shows no sign of taking him back - by the looks of these photos she's happier without the love rat. 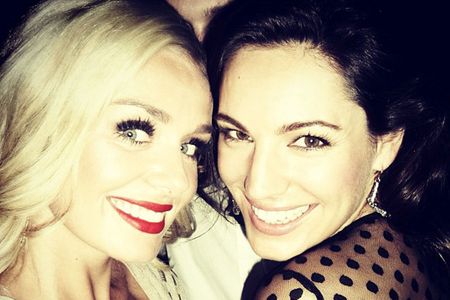 Francesca Menato
…
break-upcouple
For all the best videos, memes and shareable news!