David and Victoria Beckham took a night off from parenting duties to party London Fashion Week style last night. The A-List pair looked dapper as ever and David even revealed his latest tattoo in his vast collection.

David Beckham has added yet another tattoo to his collection.

And his latest inking is a tribute to his wife of 14 years, Victoria Beckham.

David and Victoria wore his 'n' hers black trouser suits for the event, which was hosted at Apsley House in Piccadilly.

And popping out from under David's right sleeve was a large new inking of the word Victoria at the top of his hand.

The script matches David's Love tattoo on his left hand.

Victoria, 39, recently revealed that she bought her hubby a tattoo voucher for his 38th birthday back in May - and it seems he used it to pay tribute to the former Spice Girl.

Following their appearance at the event, David and Victoria decided to make a night of it and head to another party.

The pair were seen wandering into AnOther Magazine's LFW party at Mayfair club LouLou's.

They joined the likes of Kate Moss, Suki Waterhouse and Harry Styles at the exclusive bash, before heading home in a car together. 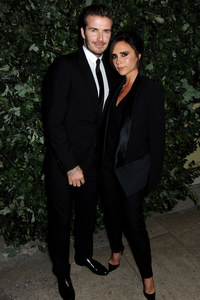 David's latest design joins the many he already has covering his body.

Earlier this year he revealed a huge Chinese character inking that runs down the left-hand side of his body.

It reads: "Life and death are determined by fate, rank and riches decreed by Heaven."

The retired footballer also has tattoo tributes to his four children - Brooklyn, Romeo, Cruz and Harper.

He once said of his love of body art: "I don't plan on having a tattoo, just sometimes I wake up and I have an idea of an image I'd like on me.

"It's just something that I've found kind of expresses how I feel or thoughts I have or memories. There's not one tattoo I've got on me that doesn't mean something." 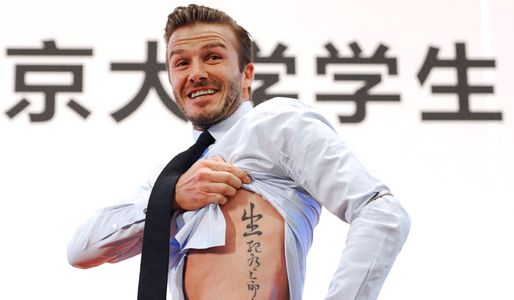