She's best known for her former role as Doctor Who's leggy, red-headed side kick Amy Pond, but now Karen Gillan has ditched her signature locks for her new film. The British star revealed a totally shaven head at Comic Con in San Diego yesterday.

Karen Gillan has had a drastic make-over and shaved off all her hair for her latest role.

The Doctor Who actress revealed her shocking new 'do at the San Diego Marvel comic convention.

The 25-year-old is best known for her part as Matt Smith's assistant in Doctor Who, though she moved on from the role last year.

She is now set to appear in Guardians Of The Galaxy - for which she got the chop.

The film is due out in 2014 and also stars Chris Pratt, Michael Rooker, Benico Del Toro and Zoe Saldana.

Chris Pratt has recently shown the world his new appearance in honour of his part.

The actor lost the flab and now has a serious six pack.

Karen appeared at the convention, first in a red-haired wig.

The TV star then removed the faux 'do and showed the crowd her buzz-cut.

She told everyone: "It’s liberating. I think everyone here should shave their heads."

She waited until she and her fellow cast members were on the panel for their movie before doing the big reveal.

Not long ago she was doing promotion for her new film Not Another Happy Ending, with her fiery hair down to her waist! 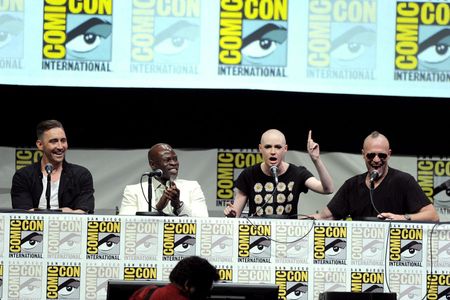