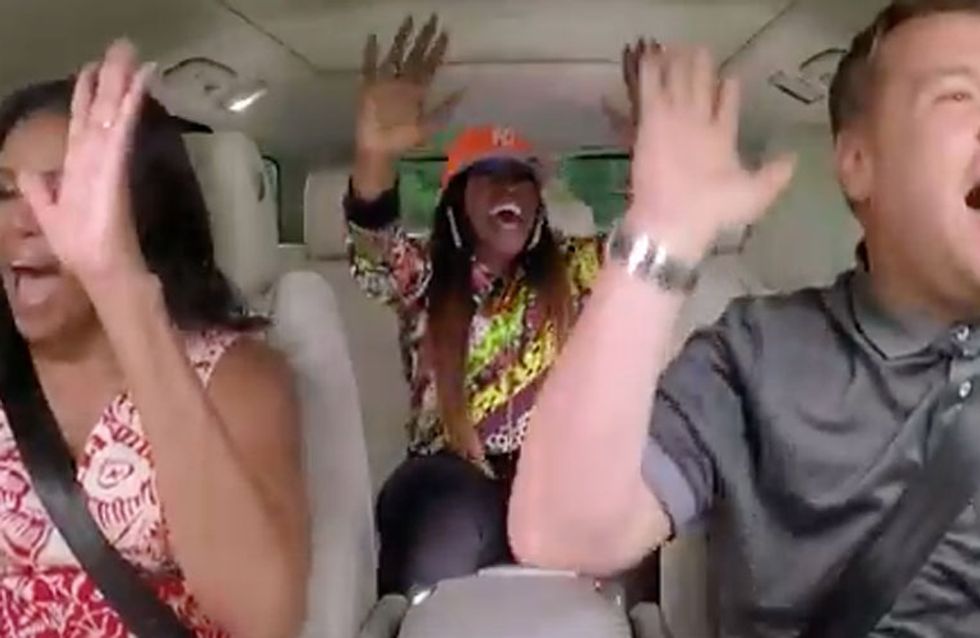 While James Corden's had some of his music idols in his passenger seat, nothing could have prepared him for the surprise appearance of real-life royalty in his latest Carpool Karaoke sketch. The Late Late Show host became a stuttering mess when none other than The Michelle Obama, otherwise known as the First Lady of the United States, invited herself into his car for a tour of the White House in what made for some seriously sassy scenes.

Carpool Karaoke has become somewhat of a rite of passage for anybody who's anybody but Michelle Obama just put all previous passengers to shame thanks to her fly AF appearance which sees her rap every single word of Missy Elliott's Get Your Freak On. Say no more.

James Corden can't quite believe his luck when the First lady jumps on in after he rocks up to the White House for a tourist tour. "This is crazy," he exclaims but what's even crazier is the fact Michelle reveals she's 'rocked out' to music in the car ONCE in the past seven and a half years (the length of Barack Obama's term as President of the United States).

After warming her up with her all-time favourite singer Stevie Wonder's legendary hit Sign, Sealed, Delivered, Michelle explains: "I’ve been in a car, maybe it was months ago, with my daughter who learned to drive and she rocked out a little bit. We rocked out. But that was the only time in seven and a half years that I’ve been in the passenger seat, listening to music, rocking out like this. So this is a treat."

And treat us she does as the pair proceed to sing their hearts out to Beyoncé's Single Ladies and Kelly Rowland's This Is For My Girls in between gossiping about secrets of the White House and talking about her education initiative titled 'Let Girls Learn'.

James is curious to know what the First Lady will miss most when she, her husband and their two daughters bid a fond farewell to the White House in autumn. Although she's officially the most powerful woman in America, she proves she's 100 per cent down to earth by stating 'the people' while the UK talk-show host says it'd be the round-the-clock room service for him. Michelle explains: "Seven and a half years - that’s enough luxuriating. I can make my own grilled-cheese sandwich. I make a mean grilled-cheese sandwich."

After executing a car-friendly version of the famous Single Ladies routine, Michelle shows she's got as much sass, if not more, as Beyoncé, saying: "We just dropped the mic." But the quote of the clip has to be: "We were making honey to put in our lemonade," in reference to Bey's 'Beehive' and new visual album 'Lemonade'.

As if that wasn't entertainment enough, Michelle and James are joined by Missy Freakin' Elliott for a word-perfect rendition of Get Your Freak On and we legit don't know how Carpool Karaoke's going to up this.

Is this or is this not THE best Carpool Karaoke to date? Let us know @soFeminineUK