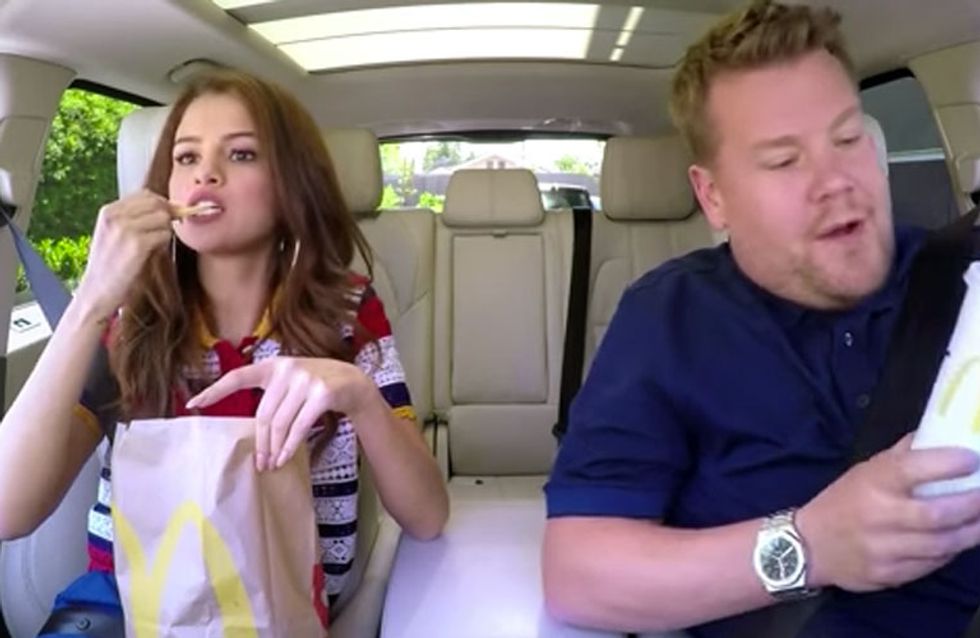 Anybody who's anybody in the music industry has had their fifteen minutes of fame in James Corden's hot-seat so it was only matter of time before pop royalty Selena Gomez was asked to accompany The Late Late Show host on his journey to the TV studios. With a year's worth of A-lister passengers before her, she had a lot to live up to but that was no contest for this slay queen.

James Corden is not afraid to rip up the rulebook but he met his match in Selena Gomez when the full-time pop princess and part-time rebel joined him on his latest commute to work for an epic edition of Carpool Karaoke.

The Late Late Show host was blessed with the company of the co-founder of pop and fashion's most-coveted girl gang (see also Taylor Swift) and not even he could've predicted what would ensue.

The sketch started in the standard fashion with James thanking his A-list car companion and politely asking: 'Do you mind if we listen to some music?' before proceeding to play a selection of the guest's best-known hits. Selena had clearly grew tired of this same-old format and took it upon herself to raise the stakes, pushing James to take a de-tour.

The dynamic duo wound up on a rollercoaster, courageously attempting to belt through Come & Get It between screams. You wouldn't be blamed for thinking Selena has some sort of vendetta against James as she later almost kills him with a ginger shot - what she drinks religiously every morning.

To make it up to him, they head to McDonald's where she massively upstages him, much to her embarrassment. Note to self: never declare 'I'm in the car with Selena Gomez' to the drive-thru cashier - it'll only induce hysterical screaming.

While the pair's extra-curricular activities provided a focal point, their conversation was also full of gems, including Selena admitting she's looking for a boyfriend of sorts and that she considers herself an OG of Taylor Swift's uber-famous all-female squad which opens up a light-hearted 'sexism in the industry' debate. All in all it's a must-watch so what're you waiting for?

Was this or was this not *the* best Carpool Karaoke yet? Let us know your thoughts @soFeminineUK