by Emmy Griffiths Published on 17 February 2016 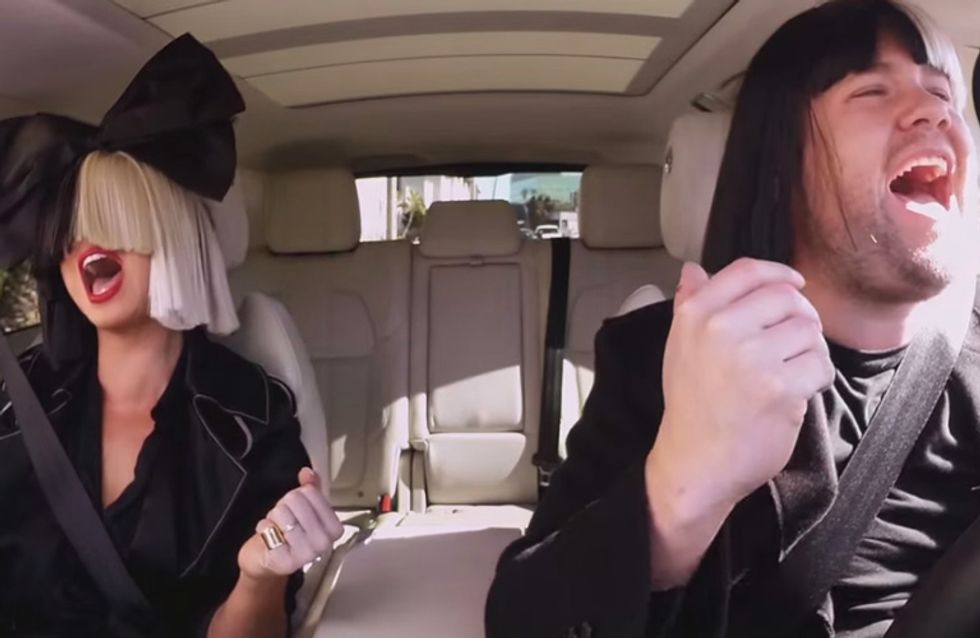 Not only is Sia insanely talented and has no interest in being famous, she's also pretty hilarious. Ladies and gents, James Corden's Carpool Karaoke has just proved that Sia is just the BEST celeb out there at the moment.

After pretending he's running late to work and needs Sia to carpool with him (oh James, you are a hoot!) James has to get out of the car of help Sia find her way to the passenger side as she is rocking one of her favourite, face-concealing wigs complete with a huge black bow.

Kicking off the car ride with Chandelier, the pair absolutely blow the song out of the water. Guys I'm just going to say it: Sia is Beyonce good. She might be BETTER than Beyonce good. I know I went there. But I stand by it.

The car ride took a serious turn when Sia explained about why she wears a wig to conceal her identity, reassuring James she only wears the wig when there are cameras around. She said: "I was a singer for ten or eleven years to mediocre success and I was an alcoholic and a drug addict and I sobered up and decided I didn't want to be an artist anymore and I was starting to become famous and it was destabilising.

"So I thought, 'what doesn't exist in pop music anymore?' and it was mystery!"

True that Sia. Did you hear Miley? Leave SOMETHING to the imagination!​

The pair continued the ride with an AMAZING rendition of Elastic Heart (in which James points out Sia hardly sounds like she's speaking English in the lyrics), before discussing Sia's belief in aliens before James dons a Sia wig and sees us home with Titanium.

15 Weird And Wonderful Things You Never Knew About Sia

Cream Of The Crop! 50 Pixie Crops That Will Make You Want Short Hair