by Helen Turnbull Published on 5 May 2016 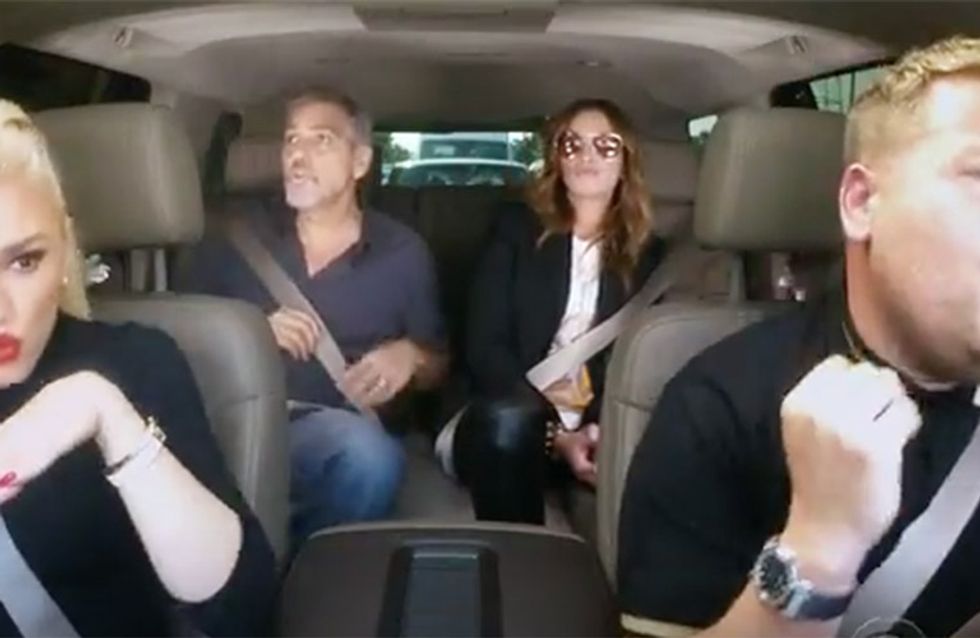 James Corden has managed to persuade everyone from Justin Bieber to Stevie Wonder to hitch a ride with him AND join in with a sing-a-long but The Late Late Show host stepped it up a gear when he decided one A-lister just won’t do. James was left with no choice but to gatecrash Gwen Stefani’s Carpool Karaoke with none other than George Clooney and Julia Roberts and the scenes which followed make for some laugh-out-loud viewing.

Gwen Stefani is the latest music sensation to agree to accompany James Corden on his journey to work (leisurely drive around LA) but she got more than she bargained for as she was somewhat upstaged by Mr George Clooney himself and the equally legendary Julia Roberts.

The former No Doubt singer is allowed her five minutes of alone time in the spotlight which sees her and The Late Late Show host belt out their best renditions of Don’t Speak, Sweet Escape and Rich Girl. As well as boasting about their vocal talents, James quizzes Gwen on her ageless beauty (which she credits to falling in love with her ex-husband Gavin Rossdale) and her Emoji obsession. A highlight has to be watching her act out random picture icons, including the sassy red-dress-girl-dancing one.

The pair soon run into trouble though as they hit an imaginary ‘four-person’ carpool lane, prompting James to make the most of his A-list contact book. He summons George Clooney who calls upon Julia Roberts and we couldn’t have picked a better line-up ourselves. The Hollywood heavyweights prove they’re good sports by joining in with a sing-a-long to ‘Hollaback Girl’ with unquestionable enthusiasm.

However, George can’t help but question Gwen about the meaning of a ‘hollaback girl’ but she plays it cool and is conscious of giving too much away. In an unexpected move, she says: "The real meaning and the real inspiration behind that song - I would never say,” to which the car responds with an audible gasp. Gwen teases them further by adding: "All I’ll say is I won, that’s all I’ll say.” George sums the whole thing perfectly by piping up with, ‘this shit is bananas’ in reference to the Holdback Girl lyric.

The awesome foursome end on a pretty rousing version of Queen’s We Are The Champions before going their separate ways.

Best carpool yet? Let us know your thoughts @SofeminineUK!

Adele’s Carpool Karaoke Is Everything We’ve Been Waiting For

Apparently, Jay Z Is Planning A Comeback to Lemonade