Friends Fan-Fiction Is Totally A Thing And It Is INSANE 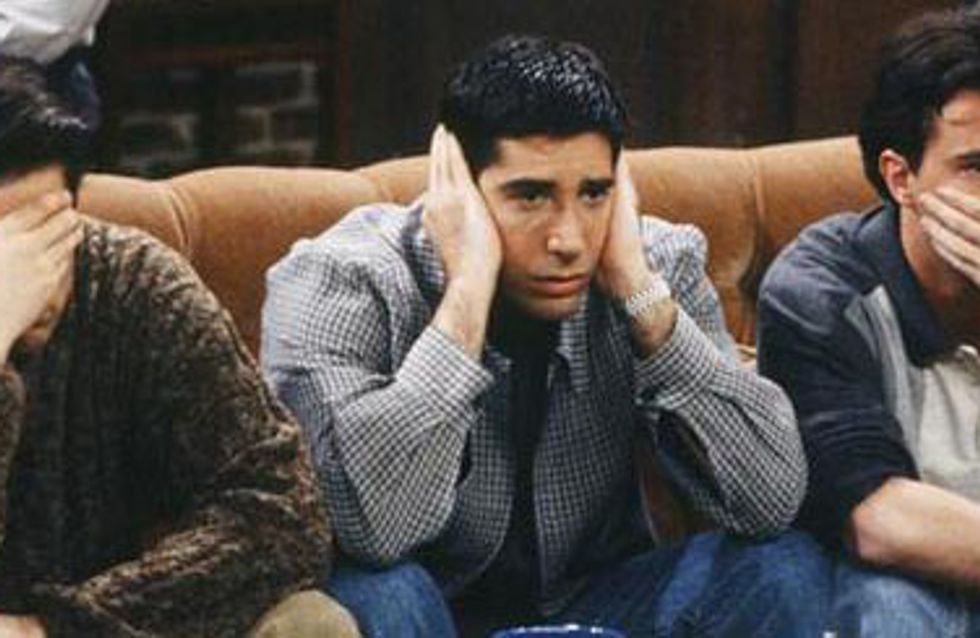 We all know the fanfiction world is a crazy one. I doubt there is anyone out there who has read a One Direction fanfic and thought 'this sounds reasonable'. So we have discovered our new favourite procrastination material: Friends fan-fiction. Yup, it's a thing. Imagine Monica, Chandler, Ross, Rachel, Pheobe and Joey plonked in the craziest of situations, but literally the craziest situations that aren't even possible, add in a very unlikely romance, and you're part of the way there.

Friends fanfiction varies wildly in tone. Comedy Central compiled a list of their favourite fanfics about everyone's favourite New Yorkers and man, some people have vivid imaginations. Tales of dinosaurs, drugs and even parallel universes. We decided to go on the hunt for some of our favourites and, in the words of one Miss Janice Litman Goralnik: OH.MY.GOD - these stories are cray cray. Check 'em out below.

1. The One Where Joey Sleeps With Monica And Chandler's Daughter

Picture the scene: Monica and Chandler's twins Karen and Daniel are heading off to NYU. (No, not Jack and Erica - they don't exist in this story.) Karen's new roommate is off trying to 'sweet talk' her brother Daniel when Joey walks into her dorm. He tells Karen he has broken up with 'Aunt Pheebs' for her, and they make sweet, sweet love. But the morning after Joey's not so sure he's made the right decision...

There's lots of love-making in this story and it's not yet finished, but it's an intriguing start, especially if you like 'Mondler'​, Joey and making luuurve. It's TBC, but you can read the first couple of chapters here.

2. The One Where Joey And Chandler Become 'Jandler'

3. The One Where Erica Is Abducted

And just to be clear, we're talking Erica Bing, not Erica the mother from whom Monica and Chandler adopt the babies from. It's Erica and Jack's joint sixth birthday party, but it all ends in tragedy after Erica is kidnapped on her way to the toilet. Will they ever find her again? READ ON TO FIND OUT. Story here.

So, someone decided to soil everyone's fond memories of Friends by making an incestuous fanfiction involving Ross, Monica and a helluva lot of really detailed sex. The actual name of this piece of fanfiction is "I'm Your Sister!", which implies Monica isn't really into the whole 'taking the relationship to the next level' kind of thing. But she is. Unfortunately she really is. Read on if you dare here.

5. The One Where Chandler Enters A Parallel Universe

When Chandler is hit by lightening after a night of already unfortunate events, it propels him into a kind of twilight zone: "Chandler felt like hell. He was tired, broke and his clothes were soaked through. At least it was all over now though." Don't speak too soon, Chandler! When he enters this alternative universe, everything is just crazy: I mean, Monica has short hair! Read it here.

6. The One Where Monica And Chandler Meet Online

"Mondler"'s romance set in 2015 means only one thing: it's an internet romance. Monica's a Youtuber and Chandler's a fan of her vids. He contacts her on Facebook, and a romance ensues. Is there an extensive use of the aubergine emoji in their relationship, if ya know what I mean? Well, you'll have to read it and find out.

7. The One With The Alternative To The Morning After

"Because of you I lost Rachel!" Ross screams at Chloe. You remember Chloe, right? She's the one who Ross slept with when he and Rachel were "on a break". Well, in this alternative, Ross is so mad about breaking up with Rachel, he decides to get his revenge on the Xerox girl. Normal Ross disappears and out comes Red Ross. Will Chloe live to see another day? It's unlikely. Read it here.

8. The One Where Gunther's An Elf

It doesn't need more of an explanation than that, does it? No, I didn't think so. Read this compelling piece of artistry here.

9. The One Where Chandler Saves Monica From Richard

Wait, what? Richard, the handsome giant with the most beautiful moustache in all the land? He would never hurt Monica! But, if he did this is how it would go, apparently. Richard, you evil, gorgeous son of a b*tch, you. Read it here.

10. The One Where Ross's Dream Comes True

So y'know how much Ross loves dinosaurs? Well, in this genius piece of fanfiction, Ross finally gets his own pet dinosaur. Like, a real dinosaur. Of which he rides on its back. It's a pretty short bit of fiction, so give it a read on your lunch break. You won't regret it. (Also, quick disclaimer: no dinosaurs were actually harmed in the making of this story. Read into that what you will.)

Have you got any other Friends fanfiction we should know about? Tweet us! @sofeminineUK

WATCH: The ‘Friends’ Reunion We Were All Waiting For Has FINALLY Happened

​​​Twenty Years Of Friends: 20 Moments We Know Off By Heart​