Who Is George RR Martin's Huge New Plot Twist About In Game Of Thrones?

by Emmy Griffiths Published on 26 February 2016 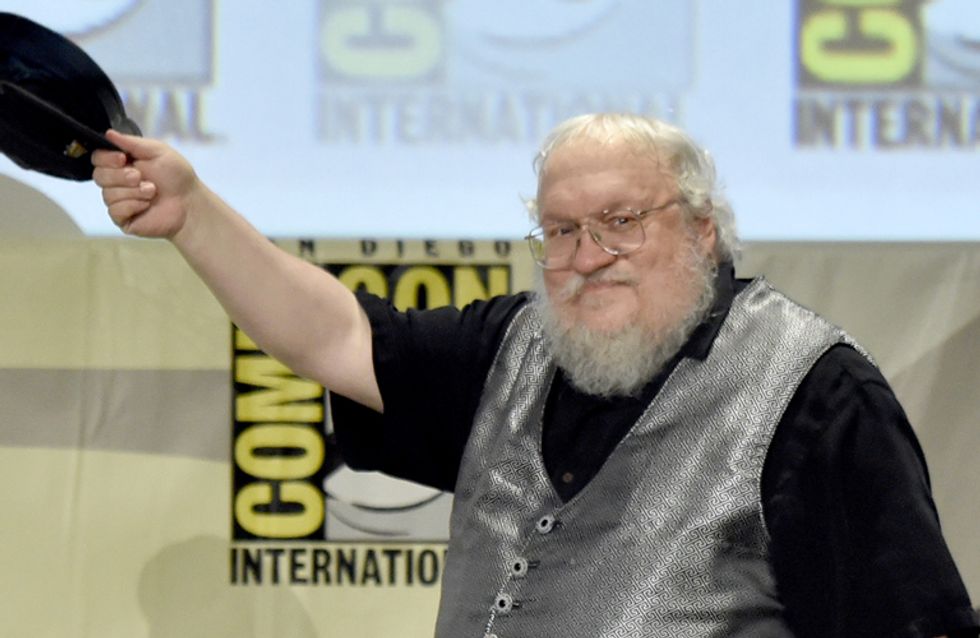 Oh how we love George RR Martin. He's like a jolly Santa Claus, if Santa made us wait years for presents and gave us the gift of murder. The GoT creator has announced that he has a major twist planned for the books that definitely won't appear on the TV show. Why? Because the show runners have already killed off the characters involved.

Speaking to IGN, George confirmed that he had decided to include a twist in the books that the TV show won't be able to replicate. He said: “I have decided to do it. Will you know it? I don’t know. It is fairly obvious because it is something that involves a couple of characters, one of which is dead on the show, and not dead in the books. So the show can’t do it, unfortunately, because they have killed someone I have not killed.”

INTERESTING. Now we have George's key clue, the obvious thing to do would be to go through all of the characters who are dead in the books but not the TV show and theorise how they could be involved in a twist, right? RIGHT. We're not nerdy, we're just practical...

As Jeyne Westerling in the books, the TV show totally transformed Robb Stark's newly wedded bride from the books to the TV show, turning her from a shy Mary Sue type to a gritty war nurse with a fully realised back story. Now LONG dead in the TV show, the Jeyne of the novels is still very much alive, mourning Robb while living in Riverrun with her mother.

Potential twist? It could be that Jeyne is pregnant, in which case there would be an heir to the North, adding complications to anyone and everyone's plans to rule the North (we're looking at your Roose Bolton).

Ser Barristen Selmy was murdered rather unceremoniously at the beginning of season five, upsetting a lot of people who saw his death as pointless even to Game of Thrones ruthless standard. In the novel he is still alive and advising Daenerys Targaryen.

Potential twist? Barristen seems like a straight arrow through and through, and has spent way too long as a man of honour in the King's Guard to have had illegitimate children/is actually a King/wants to kill Daenerys. I'm going to assume this twist doesn't revolve around him.

There's nothing like stomping over the Stannis the Mannis fandom's heart by having him burn his own daughter alive then murdered on the TV show. All of his efforts came to nothing when Brienne avenged Renly and 'did her duty' by stabbing the bejeezus out of him. However, in the books Stan le man is alive (albeit in a miserable state) and is planning on fighting the Boltons.

Potential twist? He really IS the Prince that was promised? Azor Ahai? The dragon with three heads? It's doubtful, but since Melisandre's been squawking on about it for four books now, it might be worth considering what would change if she is right.

We're very fond of Grenn and Pyp, the Merry and Pippin types of the Game of Thrones world. They are brothers of the Night's Watch, and both died protecting it in the TV show. In the books, they are alive and well (albeit really don't doing much but complain that Jon is way too serious these days.)

Potential twist? Grenn, Pyp and Samwell are actually the dragon with three heads? That would be AMAZING.

Ah Shireen, our precious cinnamon roll. She was just too sweet and good for Westeros. The TV show version, anyway. I think that the TV show is just ahead of the books on this one, and Shireen WILL be burned to death in the book and TV show alike. But what is there is more to her role than just melting the ice a bit with her sacrifice?

Potential twist? #ShireenForQueen. I'm just going to leave the hashtag here and continue to seeth over how horrible her death was.

I'm almost glad they just burned Mance at the stake in the book (before being shot by Jon), because honestly the book version of the King Beyond the Wall's tale has become so convoluted and weird. He has a son and they pretend to kill him but he's actually alive and helping rescue 'Arya' from Ramsay Bolton, but then Ramsay writes to Jon to tell him he's captured Mance but we're not sure if he has really and blah blah blah. Told you. It's complicated.

Did the kid from Love Actually just get too expensive? We weren't surprised when Jojen's death took place at the end of season five to the hands of skeleton wights (before having his throat slit by his sister as a mercy kill), as the character had predicted that was how his journey would end. That being said, in the books he is still alive and helping Bran train with the three-eyed Raven.

Potential twist? A real tinfoil theory is that Jojen Reed is actually Howland Reed who has somehow been magicked to age backwards as part of his magical powers. It would explain why Meera follows her younger brother's orders and, being the only person still alive who was present at Lyanna Stark's death, it would also mean that he could tell Bran about Jon's real heritage.

Like Shireen, I think Myrcella is probably going to die in the books as well, just as Maggy the Frog's prophecy suggests, it just hasn't happened just yet. While she is poisoned in the books after a tender father/daughter moment with Jaime, in the books her story takes quite a different turn as she suffers a terrible face wound during a botched assassination, and is currently returning to King's Landing.

Potential twist? Although I suspect Myrcella is going to die at George's ruthless hand, she could have a much bigger part to play in the books. She is the only Lannister incest child we haven't really had a chance to learn about, and the lineage of the 'Baratheon' claim to the throne could go in a very different direction should George keep her alive.

Potential twist? It could relate to the impact it will have on Meereen if and when Daenerys returns and has her husband killed for attempted murder (we wouldn't put it past her). The politics in Meereen are shaky at best, so if Dany made a move against her husband it could start all out war.

What do you think?

What do you think the twist is going to be? Tweet us @sofeminineUK!