When Andy Murray delighted the nation and took home the Wimbledon men's singles title there were two men who appeared to be courting some of the attention for themselves. BFFs Gerard Butler and Bradley Cooper were spotted in the audience in co-ordinated outfits, cheering, hugging and taking selfies.

Gerard Butler and Bradley Cooper couldn't get enough of the Wimbledon excitement and ended up drawing a lot of attention to themselves during the big match.

Competing with one another for best dressed in co-ordinated blue and grey summer outfits, the Hollywood A-Listers were loving Andy Murray in action.

Gerard Butler made it very clear that those matching outfits were entirely accidental.

Speaking at the Novak Djokovic Foundation gala dinner he said: "Bradley and I are friends. [The clothing choice] was coincidence. It was a little embarrassing. We didn't mention it at the time.

Fellow Scot Gerard and his Hangover star pal were sharing jokes and even taking selfies after the close of the match.

Mr Selfridge actor Jeremy Piven was also at the dinner and he joked that the Hollywood stars wouldn't have minded grabbing the spotlight.

He said: "I love both of them, they're both great guys and they appreciate the attention.

"They were wearing powder blue outfits, they looked like they were groomsmen - they are the dream."

Brad and Gerard weren’t the only celebs at centre court; they were in the company of Victoria Beckham, Ronnie Wood, Coleen and Wayne Rooney and Tom Hiddleston. 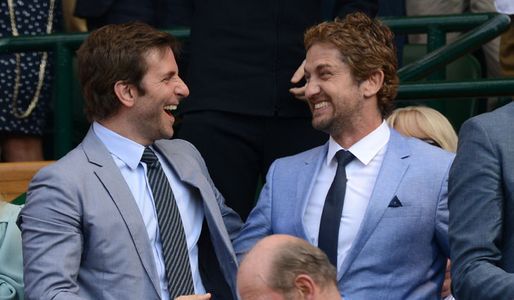 What did you think of Bradley and Gerard's matching outfits? Tweet us @SofeminineUK.