Golden Globes 2017: All The Winners And Best Moments

One of the best, actually one of the only things we look forward to in dreary January is awards season. And kicking it all off across the pond last night (while we caught precious zzzz's obvs) was the Golden Globes Gala. But fret not, cos we've rounded up all the best bits so you don't miss even a fraction of the juicy couture but more importantly - the goss!

The most in demand stars of the big and small screens joined together on the red carpet for the glitzy Golden Globes last night. And as predicted, La La Land completely cleaned up. The spangly musical starring dishy Ryan Gosling and the girl we all want as our bessie, Emma Stone, took home a mega seven awards, becoming the most awarded film in the history of the ceremony. Phew! What a way to start the year eh?

The Winner's Gallery: See who took home the 2017 Golden Globes 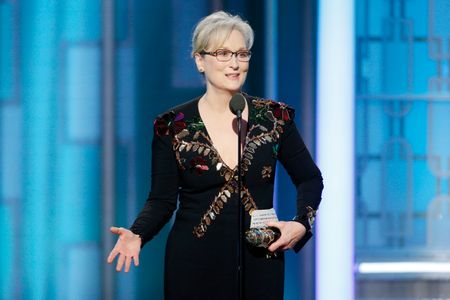 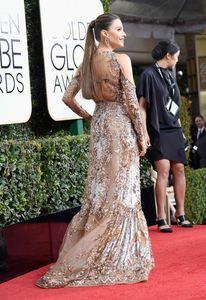 The actresses in tinseltown sure didn't disappoint when it came to bringing ALL the glamour to the red carpet. Sofia Vergara looked gorgeous as per in a fetching jewel encrusted, backless ensemble, while girl of the moment Emma Stone dominated the best dressed list (as well as the awards list) in all glitter errrythang - is there anything this woman can't do?

Meanwhile the original supers Naomi Campbell and Heidi Klum shone as bright as the gongs themselves in metallic silver slips. Of course Chrissy Teign looked smoking in a high necked golden gown, cos it's what she does best, and we can't not mention the beautiful Jessica Biel, who rocked the carpet like a pro alongside her hubby Justin Timberlake, in an eye catching Ellie Saab thigh-split gown. Style points all round ladies!

Memorable Moments From The Night

Evan Rachel Wood went up more than a few notches in our books when she explained that like us, she loves dresses, but wants to make sure that women of any age know that they are not an obligation. The star of Westworld also paid tribute to legends Marlene Dietrich and David Bowie, and we heart her for it.

Combining La La Land, Stranger Things and Jon Snow waking up in a car as if he were alive again, for us, this is the stand out moment of the night and it only runs for a mere three minutes. Those clever producers, aye?
Watch it here:

Making up one of showbiz's most underrated bromances, Jimmy Fallon and Justin Timberlake showing us their best dad moves is a ready made meme if ever we've seen one.

It was a Ryan-tastic night for Emma Stone as she presented the first award, Best Supporting Actor for Aaron Taylor-Johnson, alongside Ryan Reynolds. The Englishman, best known for his role in Kick-Ass, is well deserving of this award for playing the great villain of Night Animals - the film that has crowned Tom Ford as one of the most interesting filmmakers of the moment.

Tracy Ellis Ross took home the award for Best Actress of Comedy or Musical Series, for Blackish! "This is for all women of colour and colourful women," said the actress, who won the award in her first nomination. Bravo! She is also daughter of Diana Ross, so ya know, there was obviously a lot of talent in that gene pool.

Super Naomi Campbell and Matt Bomer took to the podium to deliver a prize, and if perfection exists then here it is in the form of this good looking pair. Talk about goals.

After five Golden Globe nominations and two Oscar nominations, Viola Davis took the award for Best Supporting Actress for Fences. Fun fact: there's 7 minutes of footage featuring Viola in the movie, but that's good enough for her to go home with the gong. After winning the Emmy, and now the Golden Globe, could she also snap up the Oscar too?

When collecting his award for Best Actor In Comedy or Musical, Ryan Gosling dedicated his award to his cast mates and family. "Emma, ​​Damien, this award is for the three of us," said the actor, before also thanking his wife and children. *swoon*

The Golden Globes also paid a well-deserved tribute to Debbie Reynolds and Carrie Fisher, as our hearts broke all over again.

Claire Foy scooped the prize for best actress in a television drama for her portrayal of the Queen. When collecting her prize, the actress paid tribute to the Queen herself, making it one of the great revelations of the night. "I would not be here if it were not for an extraordinary woman, like Elizabeth II, the world would be very good to have more women like that."

The Cecil B. DeMille Award (one of the most anticipated of the night) went to a very deserving Meryl Streep, and Viola Davis gave her some emotional words while presenting her with the award: "I feel proud to be an actress thanks to you. You make me feel that my face, my age, my body are enough. If you ask me as an artist what should I do in this life, I would say that I have to be strong like you." We couldn't have said it better ourselves.

Meryl took to the stage with the whole audience cheering her on - rightly so! Giving us all a lesson in how to slay an important speech, she exclaimed: "Please sit down, you have to forgive me but I'm going to have to read it: everyone here is from one of the most vilified sectors of the United States: Hollywood, foreigners and the press," she began to say, explaining that Hollywood is a mixture of races and actors from all over the world.

"There has been an interpretation that has hurt me this year, a bad one, because it has made its audience laugh. A journalist with a disability who is going to sit in the most powerful armchair in our country. The lack of respect incites a lack of respect. Violence incites violence, and this brings me to the press. To all, in the issues in which we feel attacked. That is why freedom of the press is in our fundamental freedoms," she claimed, referring to Donald Trump. Finally, she also wanted to remember her late friend Carrie Fisher. Bravo Meryl.

Of course Emma Stone took home the Best Actress in a Musical/Comedy award, with a glittering acceptance speech to go with it: "La La Land is a film for dreamers and I think that hope and creativity are two of the most important things in the world, and anyone who has closed the door and who is tempted to abandon it, go ahead." Can we be her?

Finally, it wouldn't be an awards show without Leonardo DiCaprio now would it? He made his appearance presenting the Best Actress award to Isabelle Huppert. She was of course ecstatic, making an excited speech: "Thank you, oh my God, my heart is a thousand [sic], if you could hear ... Thank you very much!"

Well it's fair to say ve'd be pretty lost for words too, if we ever got to share the podium with Leo!

SHUT. UP. A Mean Girls Musical Is On The Way!