The world is currently bracing itself for Vanity Fair’s unauthorised profile on Gwyneth Paltrow. Any A-lister would be terrified and quaking in her Louboutins, but the Hollywood actress clearly isn’t about to let herself be intimidated by others. The mother-of-two has one message for her critics: ‘F**k what anybody else says.’ Go Gwyneth!

But despite her hardworking attitude and multiple successes the 41-year-old is about to be the subject of a tell-all from Vanity Fair.

It’s rumoured that the forthcoming profile will expose all of Gwyneth’s worst secrets, including her celebrity rivalries, diva antics and a supposed extra-marital affair.

While most would be cowering in fear, Gwyneth is holding her head up high and refusing to be bullied into submission.

In a candid interview with Red magazine, Gwynnie insists she doesn’t care what people think of her.

The Iron Man 3 actress says: “This is the thing, it’s like the older I get I realise it doesn’t matter what people who don’t know you think. It doesn’t matter. You’re wasting your energy.

“It’s like, if your partner comes to you – or your best friend – and says, 'Listen, I want to talk about something you did that hurt me, or I think you could improve', sit down and listen to what they have to say. But some friend of so-and–sos – it’s like, who gives a sh*t?

“And for me, obviously, I have it on a very large, global scale. I don’t have it in the village gossip way; but it’s the same thing. That’s why I really don’t read anything. Because if it’s important, it filters down to me."

Gwyneth clearly values the support of her girl mates, especially fashion designer Stella McCartney and trainer Tracey Anderson, and she reveals that she finds it frustrating when women are not supportive of one another.

The actress, who very publicly fell out with Madonna, admits: “It makes me cross… I personally think that the work/life balance for a woman should be exactly what she feels is right for her.

“It doesn’t matter what anyone else thinks. That’s what we’ve got to let go of. That idea of ‘Oh god, if I don’t show up to this concert, all the other mums are going to think I’m terrible.’ Well, so f**king what.”

Wow. Whether the Thanks For Sharing star is sending out a message to her detractors or just affirming her beliefs, one thing’s for sure – Miss Paltrow is passionate, hardworking, and isn’t about to be pushed around by anyone.

Do you agree with Gwyneth’s strong views? Tweet us @SofeminineUK!


The full interview appears in the December issue of Red (on sale 6th November) guest-edited by Gwyneth Paltrow and her team at goop.com. Also available in digital edition on Apple Newsstand. 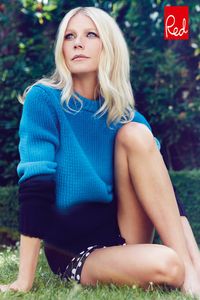