by Dagney Pruner Published on 28 October 2014 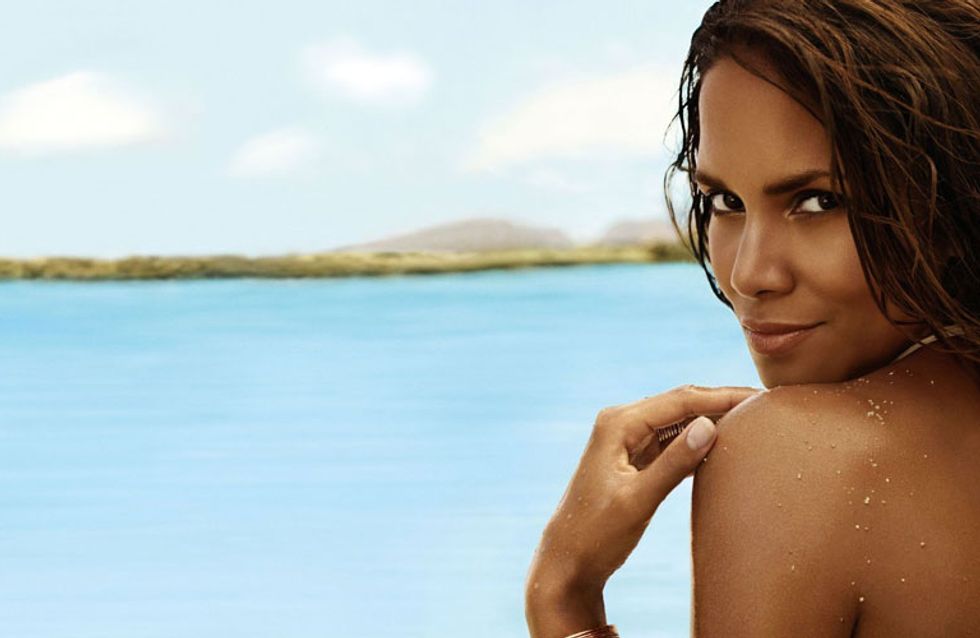 Halle Berry just launched her first lingerie line Scandale, so girlfriend recently opened up to Yahoo Style about her lingerie habits. Given that she's 48 and looks hotter than most college co-eds, we were VERY excited to hear that she was revealing some of her secrets. One of the biggest surprises? Perky boobs require wearing a bra 24/7... who knew?

Although Halle Berry is a wonderful actress, we would be lying if she wasn't possibly better known for her insane physique. Halle (per tradition, we'd probably be BFFs with her, so sticking to first name basis) is a woman who has always looked healthy, toned and curvy from the time she started acting in her early 20's all the way to her late 40's. Which basically makes her a unicorn.

Halle launched Scandale Paris as an affordable lingerie line (nothing is above $18) exclusively for Target. She said her humble roots in Cleveland inspired her to make a sexy underwear line that is affordable to all women. The lingerie will be made of nude and black lace, and will not feature any floral print, as Halle says she no longer looks good in flowers. Challenge. Halle would look in a potato sack.

So here are a few of the things we learned from the woman who has managed to defy gravity:

She ALWAYS wears a bra

"I've always been a little busty and my mother taught me when I was very young that if I don't want my boobs to hit my knees by the time I'm 30, always wear a bra, even to bed. Comfort is very important to me because I wear my bra around the clock. For a girl like me, a good bra is everything."

Needless to say I am sure she was an early bloomer. I have never been comfortable sleeping in a bra, but I've also never won an Academy Award or won Sexiest Woman Alive (yet), so what do I know?

Aging in Hollywood affects both men and women, and not just their looks

"I think both actors and actresses face this. It's not just women. As an actor you face having to age and redefine yourself. The roles you were able to play before, you can't play anymore. So you have to adapt and play a different role."

Hear that, Channing Tatum? You will not always be able to play a stripper. Halle does make a good point though, actors that are typecast in young roles find it to be an extremely difficult uphill battle to make their careers last. Just ask anybody from the cast of High School Musical, except Zac Efron.

Halle continued on to say that getting older is especially hard for women because once you get older it becomes very hard to be the sex symbol. Unless you sleep in bra. Then maybe.

"And as actresses, we need to accept that we're not always going to be the sexy ingénue, but hopefully we get better with age. We improve our craft. We have to be happy where we are, and not try and chase yesteryear, because that's when it becomes problematic."

"I think what French women understand that I have come to understand is to always put energy into what you wear under your clothes. They would not put their sweats on and run to the market. My husband [Olivier Martinez] calls me out on that. I have definitely changed as a result of being married to a French husband. I care more about what I wear out of the house and he calls me out on it if I don't."

Even though Olivier Martinez is smokin' hot in Unfaithful, I gotta say I could never get married to a man who expected me to get dressed up to go food shopping... or to do food shopping at all for that matter.

Women should buy lingerie for themselves, nobody else

"It's about how you feel. I think women buy lingerie for themselves, to have their own little secret. And when you feel sexy inside, people will pick up on a confidence you have. And at the end of the day, your partner will get to reap the rewards."

If there is ANYTHING I would trust Halle's advice on it would be: A. how to look sexy, B. how to feel sexy, and C. how to get your husband to want you all day, errday.

Want to see her lingerie photo shoot with Yahoo Style? Look no further.

Think Halle has some good advice? Tweet at us @sofeminineUK!

I'm Fat, I Need Botox & What Is That Pose? 22 Thoughts Girls Have When They See A Photo Of Themselves