Why The Hogwarts Express At Warner Bros. Studio Tour Is Every Potter Fan’s Dream Come True

by Emmy Griffiths Published on 18 March 2015 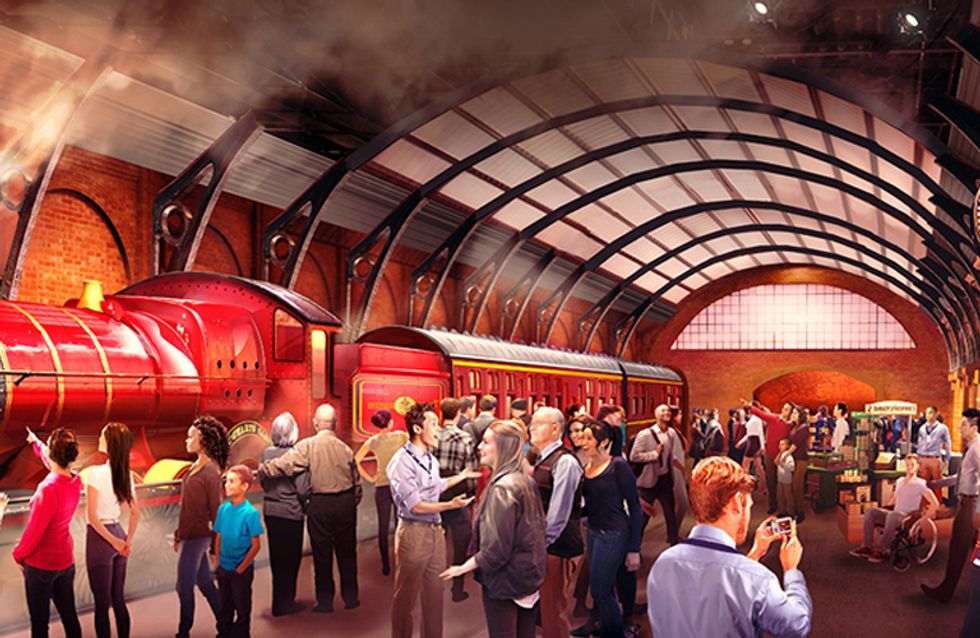 Whether you have already been and spent three glorious hours looking at every detail of the Harry Potter universe or you are still saving up sickles to make the trip, the Warner Bros. Studio Tour is an absolute must-see for all HP fans. The studio has now recreated Platform 9¾ to be opened on Thursday 19th March. Since we were lucky enough to get a sneak peek, here’s why we KNOW you’ll LOVE it.

You can go inside the freaking train

Cue leaning out of the carriage and quoting: “I’m not going home. Not really” with the theme song ringing in your head. Everyone else in the queue may boo you, but it’s a rite of passage.

You can run through the wall to get to the platform! (But not really)

Disclaimer: please do not try to run through ANY walls. That being said, there is half of a trolley sticking out of the wall and that you can pretend to push through. Be sure to have your House scarf at the ready!

Cosplayers are going to have the time of their lives in this one. Unlike the rest of the tour, which with the exception of the Great Hall consists of small sections of the set, Platform 9¾ is a full recreation of the platform, right up to the arched ceiling. If you want to do a Molly Weasley and storm through the crowds down the platform holding a rat shouting for Ron, you can. YOU CAN!

You can recreate scenes from the films

Settle into a carriage and re-enact a scene as the Director barks instructions at you. Try to catch that chocolate frog! The Dementors are attacking! It’s COOOOLD! You always knew you should have secretly been cast as Ron/Harry/Hermione, so this is your chance to PROVE IT.

The props! The beautiful, beautiful props!

Once inside the train, each carriage you walk through is a recreation of each film. As the trio get older, the carriages get messier, with Harry’s hoody, Ron’s classic homemade jumper and Hermione’s handbag strewn around.

Bonus: keep an eye out for Lavender’s mark on the Half Blood Prince carriage!

The train-themed souvenir shop is the ultimate temptation

We promise you won’t be able to stay away from the goodies. If we have to be Muggles, we’re going to be the most wizard-fashion conscious Muggles EVER.

The rest of the tour is just as glorious

If you haven’t been to the Studio Tour yet, let us clue you in. The Great Hall, The Burrow, The Gryffindor boys dorm, the Ministry, the Knight bus, Privet FREAKING Drive: every single place or prop you saw in the films is right there in the studio. Sure it takes the magic away a little, but seeing the sheer detail that went into the films is just incredible.

We’re just one step closer to getting to Hogwarts

We had the Great Hall and now we have Platform 9¾, so it’s only a matter of time before the studios builds Hogwarts then lets everyone enrol, right?!

​So what are you waiting for? The new feature of the tour will be open on March 19th and we’re wasting NO time! Sound good to you? Tweet us @sofeminineUK!

This article was written by Emmy Griffiths. Geek out with her @emmyfg!