Harry Styles has set his sights on Jennifer Lawrence

Harry Styles allegedly has a bit of a thing for Jennifer Lawrence and has gotten in touch with the Hunger Games star to try and meet her. The One Direction singer apparently messaged the Oscar-winning actress in the hopes of winning her over with his cheeky-chappy personality. You can try Harry, but apparently JLaw has rekindled her relationship with X Men co-star Nicholas Hoult. If it's true then stay away Styles – Nick and Jen are the best couple ever!

Harry Styles has reportedly set his sights on Jennifer Lawrence.

According to Entertainmentwise, the 19-year-old singer has a bit of a thing for the Hunger Games actress, and according to a source, he has messaged her in the hopes that she’ll hang out with him.

​A bit desperate there Hazza!

A source revealed: “Harry has sent Jen a message telling her he’s coming to LA to chill out after the band’s world tour.
​
He’s said he hopes they can hang out together and see where it leads.”

This may leave the You Don’t Know You’re Beautiful singer a tiny bit disappointed, as The Silver Linings Playbook star is apparently back with her boyfriend of three years and X-Men co-star Nicholas Hoult.

However, the insider continued to say that Jen was flattered by Harry’s advances, saying: “[Harry] also wants to show her his new LA pad. She is flattered and has told him she likes playing 1D songs.”
​
Sounds to us a little like she pity-rejected him, but what do we know?

Harry is a public fan of the actress, and clearly she was on his mind during his interview with InStyle magazine, as he admitted: “She dresses cool. I like her at all those big awards things.”

Yes, you and the rest of the world Harry. But since the One Direction tour is just about wrapped up, we suppose he’ll have plenty of time to get chasing!

Jen’s about to get much busier though, as the highly anticipated sequel to The Hunger Games, Catching Fire, is out later this month where she will be back in action as everyone’s favourite heroine, Katniss.

Do you think Harry could woo Jen? Tweet us @Sofeminineuk 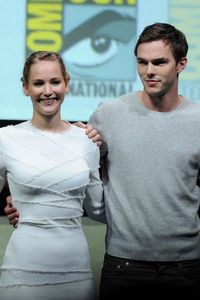