Harry Styles won the prestigious British Style Award at last night’s 2013 British Fashion Awards. The fledging fashion icon – and one fifth of One Direction – lived up to the title by turning up to collect his award dressed head to toe in Saint Laurent. You know what they say? Styles by name, stylish by nature (no one actually says that but we think it’s pretty snappy!).

One Direction heartthrob Harry Styles attended the British Fashion Awards last night, where he scooped the 2013 British Style Award, a coveted award that is voted by the general public.

The BFA gong is awarded to “an individual who most embodies the spirit of British fashion and is an international ambassador for London as a leading creative fashion capital.”

Although obviously legions of dedicated 1D fans most likely voted multiple times for the 19-year-old, Harry’s sense of style and love of fashion is indisputable.

The pop sensation was presented with the award by good friend and model Alexa Chung in front of a number of A-list attendees, including Kate Moss, Sienna Miller and Gwyneth Paltrow. 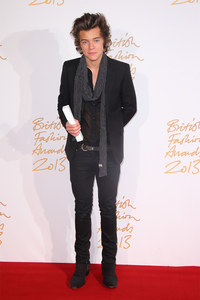 “All eyes were on him as he worked the room with air kisses for the great and good of the fashion world.”

“His popularity is clearly not limited to teenage girls as fashionistas flocked to have their picture taken with him.”

It wasn’t all ego-stroking for the One Direction star though, as host comedian Jack Whitehall made a point of embarrassing the young lad by ribbing him about his busy romantic entanglements and rumoured love interests.

Recently Harry has been establishing himself not just as a music star, but also as a fashion icon, attending London Fashion Week and sporting clothes straight from the catwalk.

Unsurprisingly the boybander turned up to last night’s stylish proceedings looking perfectly turned out in his trademark Saint Laurent black skinny jeans, a black shirt and tuxedo jacket, accessorised with a natty silk scarf and a pair of Chelsea boots.

Harry seemed delighted to have won the accolade, which further cements his position among the London fashion set whom he seems to be increasingly spending more time with.

Apparently Harry and the rest of the attendees partied late into the night, so we’re pretty sure the 1D star will be waking up this morning with a pretty sore head!

Check out the pics of all the gorgeous 2013 British Fashion Award attendees here! Do you think Harry Styles deserves to win the BFA British Style Award? Tweet us @sofeminineUK.