Idris Elba is on a career high. The 41-year-old Londoner is currently starring in crime drama Luther, earlier this year he was one of the leads in Guillermo Del Toro’s blockbuster Pacific Rim with Charlie Hunnam, and next up he appears as treasured world statesman Nelson Mandela in his latest movie – which is already tipped for Oscar success. Not only that but he found the time to direct and star in a music for video for Mumford & Sons - how does he find the time?!

Sofeminine sat down with the charismatic English actor for a quick chat about everything he’s been up to, and find out how on earth he ended up collaborating with Grammy-award winning folk band Mumford & Sons...

How did you enjoy working with Charlie Hunnam on Pacific Rim?


What is your most vivid memory about making Pacific Rim?

I remember doing this massive rain scene in which I am watching this Jaeger fall out of the sky and it was quite fun. It was a massive stage built at the top of this roof. It felt so real.

Soon you're going to be returning to the small screen with your TV series, Luther. Are you looking forward to it?

We haven’t been on TV for almost a year and a bit. I was very nervous at the time thinking, ‘Oh I am not sure that the audience is going to go with it,’ but they did [go with it]. The first episode of the new series got between 5-7 million viewers.

It was on a Tuesday. There was nothing else on, mind you, but it was great. We got a great response and it trended on Twitter for at least an hour.


Why do you think that Luther is so popular?

It’s bigger than life. It’s like a movie. The character is big. He is not your typical English gent but yet he is. He goes after horrible, horrible people and we are fascinated as audiences watching him and observing him. And then you've got a cop that’s equally as horrible when he goes after you. That is what its appeal is.

I became a producer later on and my role is really just keeping the integrity of the character and also the show. ‘Lutherisms.’ I protect the ‘Lutherisms’.


Haha! And what are the ‘Lutherisms’?

They range from everything like the type of actors that come into the show, the type of camera work. ‘That doesn’t feel very Luther but this does.’ I say that quite a bit.

I love to act but I also love the logistics of pulling it together, and watching great filmmakers and actors making it happen. I’d like to direct more than produce, but being a producer is quite a satisfying thing.


As well as starring in a TV show and a whole host of films this year, didn’t you also find the time to direct a music video for Mumford & Sons?

I remember when the guys called in and said, ‘Hey, we’d love Idris for a video that we are doing.’ I said, ‘Wow.’ Then they sent me an idea and I said, ‘Can I tell you guys, I don’t really want to be in the video. I’d like to direct it. It would give me an opportunity as I haven’t done much before.’

And they said yes and there it was. I loved the idea of directing. That interest has always been there. I remember when I was at drama school you had to put scenes together. My teacher would say, ‘Right, here’s your scenario, make a play about it.’ I got an A+ for drama.

Mumford & Sons - Lover Of The Light

How did you get started in this business?

It was literally from secondary school and being given an option to try and act. When I left school I got into small, local theatre groups and at the same time I was djing on a radio station, so the two worlds were pretty weird and odd.

But the transition was pretty smooth. I had confidence when I was on the radio and I used that confidence to get into my first job as an actor.


Was that creativity always nurtured when you were a kid?

Yes, through my parents. I was an only-child and while I wasn’t spoilt I remember that they used to make me get up and sing songs to them and do break-dancing, all the stuff that was confidence building and turned me into what I am today.


Did you keep your music going even as your career took off an as actor?

I did a lot of it simultaneously. My music is really experimental. I put stuff out there and I have sold stuff and then I have worked on more specific albums with people like Jay-Z and Angie Stone, where the focus is to make a great track.

I feel like music is always going to be a part of me and I think one day I am going to put out an album or two where audiences will be surprised. They’ll be like, ‘It is not bad. It is a bit weird; I didn’t expect him to be singing and rapping!’


How did you enjoy playing Nelson Mandela in Long Walk to Freedom?

I want people to see the film. I want people to understand it and then ask me questions because without seeing it people have already got ideas about what it should feel and look like. I am not Morgan Freeman, I am not Terrence Howard, and I don’t look like Mandela.

I don’t have that sort of complexion and we are not doing a look-alike story. This is a real story and this guy, Idris Elba, happens to be playing him. 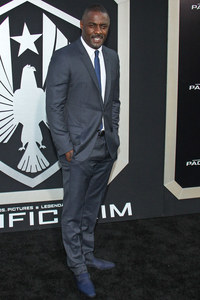 Are you as excited for Long Walk To Freedom as we are? And did you see Idris in Pacific Rim? Tweet us @SofeminineUK!

​PACIFIC RIM is available to own on 3D™, Blu-ray™ and DVD on Nov 11 as well as Digital Download from Nov 4, preorder your copy now.

by the editorial team
+
All the news about Idris Elba