What do you give the man who has absolutely everything? It would be tricky if Kim Kardashian didn’t have a trick up her sleeve – or should we say, lack of sleeves. Apparently the reality TV show star is planning on gifting some delightful professional and yes, naked, photos to her fiancé for Christmas. But what else is in store for the power couple for the holiday?

Kim Kardashian is giving Kanye West naked photos of herself for Christmas as the two of them plan the merriest day of the year.

Although the pair were meant to be spending Christmas in New York, according to Heat Kanye has been guilt-tripped into dropping into the Kardashian Khristmas for a few hours since Kim has never spent the day without her family!

Following that, according to the source, the pair “will sneak off for a late night get-together with some close friends. The guests have been sworn to secrecy.” 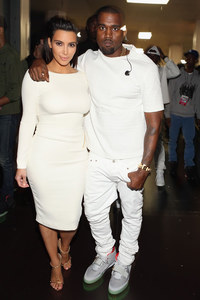 Allegedly the two are spending three hours with the rest of the Kardashians and in return, Kim is having a meal prepared of all of Kanye’s favourite food and, along with her saucy snaps, an array of other gifts that are supposedly worth more than £3 million. THREE MILLION. Give that a moment to sink in.

“Kim was devastated at the idea of not spending any of Christmas with her mum – especially as it’s Nori’s first one ever. Now Kim’s kind of got her way, she’s spoiling Kanye, cooking his favourite Southern soul food and buying him a diamond-encrusted Hublot Big Bang watch.”

Then of course, you have the naked pictures. Apparently Kim has asked photographer David LaChapelle to shoot the pictures to put in an album for Kanye. The source said: “She knows he loves her body, so what better way to make it a memorable Christmas?”

It sounds like Nori is going to be receiving more presents than any baby ever did in the history of everything as well, since allegedly the couple have bought her a diamond-encrusted teddy bear, cashmere booties and a white gold bracelet engraved “Love Mom and Dad.”

It also sounds like Kim has a sense of humour regarding her little bundle of joy, as she is going to dress baby Nori up like an elf for the purpose of extreme cuteness. The source said: “Kim knows it’ll bring a smile to Kanye’s face.”

We hope she instagrams this!

Do you think the couple’s Christmas will be lavish? Tweet us @sofeminineUK