High school student Emma, 17, today wrote a letter to her principal stating: “School dress codes perpetuate sexism, rape culture and victim blaming. It’s time we put a stop to that.” Does what she's saying make sense? We spoke to her to find out more.

Over the last couple of years there have been a vast amount of discussion over the topic of school uniform. Girls have been sent home for shaving their heads, wearing skirts that are deemed to short, or even being forced to wear 'shame suits' instead of their original clothing to highlight the fact they didn't stick to the dress code, but now more than ever before these actions are being questioned. Because really, why shouldn't a girl be able to wear a skirt above her knees on a hot day? What is the harm in having an individual hairstyle? Or are these rules simply still in place for ideals that many no longer value?

In June this year over 250 girls were taken out of lessons in an Isle of Wight school on one day when they were told their skirts were too short or their trousers were too tight. Defending the actions of his school, the headmaster said: “We are preparing students for the world of work so it is important that we teach students the importance of managing their appearance and working on a dress code.”

In this sense, we understand the importance of dressing smartly in preparation for a future career. It could be said that school is preparation for all aspects of working life, and naturally in the working world tiny skirts would not fly - something that definitely needs to be learned.

But why would tight fitted trousers be deemed inappropriate? Surely these are more a fashion statement than bad taste? Parents also found the entire thing to be ridiculous, with one saying: “[My daughter’s skirt] was knee length, but when she went to school she was immediately sent home…it was the perfect size, it was not ‘too short’ – I would not have bought it otherwise.”

Even schools without uniforms are putting restrictions on the dress code of their female students - and all of them are to do with propriety. This is what high school student Emma covers in her letter. Check it out below. 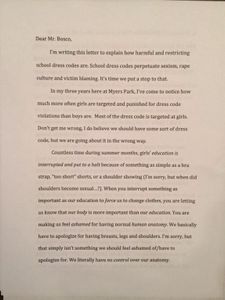 In her passionate letter, Emma states that: “school dress codes perpetuate sexism, rape culture and victim blaming. It’s time we put a stop to that.”

Speaking to SoFeminine, Emma said that although the rules in her school are not too strict, she had heard countless of similar stories and wrote it hypothetically. She said: "I pretty much wrote it just to gain awareness of the issue. I wrote it to our society. We need start empowering each other, not shaming each other."

Naturally we agree with her, to a degree. Women SHOULD be allowed to wear whatever they want without it being seen as an invitation and without being sexualised.

However, in a society that without a doubt does sexualises teenage girls, especially in a young ‘lad’ culture where hormonal boys are taught that slut shaming women is a cool and funny thing to do, is a demand to prevent boys from having an interest in girls no matter what they wear really realistic? Or should a conservative dress code be in place to protect these girls?

Emma, for one, believes that ANY blame should sit with the men alone, telling us: "I think my goal is extremely realistic. Women and girls should be able to wear what they want, when they want, period."

This is not the kind of environment she should have to endure at school and yet many young girls feel uncomfortable in their own skin because society tells them to. Isn't it time to stop that?

Had to write a letter to the principal about a problem at school we face and I kinda just pic.twitter.com/raRnkfJ94h

In a similar case, a 17-year-old student named Clare in Virginia was sent home after chaperoning fathers had complained that her skirt was too short, despite previously checking it met the rule of being longer than her fingertips.

On leaving the party, she said that one of the organisers approached her to tell her her dress was too short. She said: “[The organiser] told me that some of the dads who were chaperoning had complained that my dancing was too provocative, and that I was going to cause the young men at the prom to think impure thoughts.”

I was told that the way I dressed and moved my body was causing men to think inappropriately about me, implying that it is my responsibility to control other people’s thoughts and drives.”​

It seems that the only reason girls are being covered up is to prevent distracting boys (and men), but how about teaching guys to respect women rather than sexualise them (or not) according to their clothes. Could this ever be a realistic goal?

We're not so sure.