by Alison Potter Published on 12 November 2012

It was clear during the last series of Celebrity Big Brother that Jasmine Lennard is not a woman you would want to mess with.

But her latest behaviour has shocked everyone, after she allegedly threatened seriousl assault against someone while filming Channel 4 food show Come Dine With Me.

The 27-year-old reality star - dubbed "Queen Bitch" by her CBB housemates - allegedly clashed with former X Factor finalist Marcus Collins and Benidorm star Crissy Rock and as a result has been kicked off the Come Dine With Me Celebrity Christmas special.

Jasmine allegedly threatened them both with physical violence and is said to have also outrageously declared: "I'll glass you".

Channel 4 bosses tried to defuse the fight but they eventually had to reportedly remove her from the festive cookery show because her presence was “toxic” and potentially dangerous to her fellow co-stars. 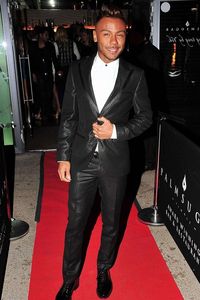 “The bosses decided they had a duty of care to the other contestants.

“Jasmine finally went because it all kicked off and she was accused of threatening to glass someone.”

Jasmine was reportedly picking on Marcus, but things took a nastier turn when actress Crissy jumped to the 24-year-old singer’s defence.

Benidorm star Crissy, 54, allegedly screamed at Jasmine: “If you want to start on anyone then f*cking start on me.”

The source added: “They were serious rows, and Jasmine and the others were upset. She prides herself on being hard-nosed but she can come across as quite intimidating.

“It ended up as a full-blown screaming match. The producers love a bit of tension, but this went too far and Jasmine had to go.”

The aggressive actions of the mother-of-one meant that filming was thrown into chaos and a significant amount of the show’s budget has been wasted.

Although Come Dine With Me bosses have since found a replacement in the form of ex-Corrie star Margi Clarke, they are said to be furious that a crucial part of their festive schedule has faced such a setback.

The show features celebrities who cook meals for each other to win a prize for charity, most recently Alex Reid and Nicola McLean featured in the Halloween special.

But despite getting kicked off the show, Jasmine wasn’t ready to end the fight there, as she continued the row on Twitter.

On Thursday she wrote: “@Crissy Rock on a serious note the woman needs help. I may have anger management issues but this woman... wow... just wow.”

She then added: “And the award for the most mentally disturbed person I have EVER met goes to @Crissy Rock.”

The Come Dine With Me Celebrity Christmas special will air on Channel 4 on Christmas Eve.

Jasmine Lennard accuses Rhian of leaking a nude snap of her

Security enlisted to separate Jasmine and Rhian at CBB final

by the editorial team
+
All the news about Jasmine Lennard