We have been rooting for Jennifer Aniston’s love life ever since Brad Pitt left her for Angelina Jolie and a brood of children. Let’s face it – who isn’t Team Jen?! We were delighted when she got engaged to her lovely boyfriend Justin Theroux, and now we can all go crack out of champagne as it has been revealed that the couple are planning on having a baby! Woo, team Jen!

Apparently Jennifer Aniston and her fiancé Justin Theroux are planning to use a surrogate to have their first child before their wedding! Mini Jen? Yes.

According to Grazia magazine, the two made the dramatic decision after Jennifer consulted her friend Nicole Kidman, who used a surrogate for her second daughter, Faith.

A source revealed: “Jennifer’s been intrigued with the idea of surrogacy for years. But it wasn’t until she spoke to Nicole that she found the courage to go for it.” 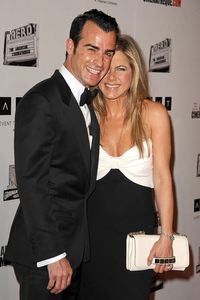 Apparently the pair are now on the hunt for the perfect person to carry their children, aiming to be pregnant by the summer time. It sounds like the search for a surrogate is the pair’s number one priority in front of planning their wedding.

The source continued: “They both want a family and there is no doubt Jen is currently exploring the surrogate option. Justin wasn’t so keen at first, whereas Jen’s been leaning towards it for a while, having seen it work so well for both Sarah Jessica Parker and, of course, her good friend Nicole.”

It sounds like the two will have to scrap together time to look for a surrogate though, since they are both rammed with their work schedules, with Jennifer filming two films back-to-back, and Justin working on a new HBO series, The Leftovers.

It is also no secret that fans of Jen want her to have a baby almost as much as she does, with one fan even going as far as to create a fake Facebook page pretending to be the star and claiming she was pregnant. Fans can be weird.

However, one source said: “You know what they say, there’s no smoke without fire, and planning a baby is certainly what’s being talked about now – but through a surrogate.

“They’re both so desperate to welcome a little one soon, so Jen’s cramming as much work in as she can, before she takes time out to eventually welcome their child.”

We know that Jennifer wants a baby, so we’re waiting on tenterhooks for this news to be confirmed! She told People magazine back in 2011 that she would be delighted when it happened. She said: “I think people honestly just so want me as a mom and married. Let me have that moment when I get to say, yes, in fact, I’m having a baby...and I just want to say ‘Everybody, relax! It’s going to happen.”

Do you want to see Jennifer with a bambino? Tweet us @sofeminineUK