Even in the land of celebrities girls can get protective of their boyfriends! Apparently Jennifer Lawrence is worried that Kristen Stewart will be in hot pursuit of her man, the beautiful Nicholas Hoult, since the two of them are due to appear in a new film together as a loved up couple. We never pegged Jen as the jealous type!

Apparently Jennifer Lawrence is worried that Kristen Stewart is planning to steal her boyfriend, Nicholas Hoult.

Kristen and Nicholas will be spending a lot of time together on set for their new film, an adaptation of George Orwell’s 1984 which will be called Equals, in which they play a couple.

According to the National Enquirer, Jennifer is worried about how much time they will be spending together. An insider said: “Considering Kristen’s history with British men, she’s the last person Jennifer wants to see kissing her boyfriend on the set.” 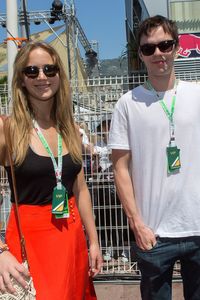 The source continued that Lawrence is: “determined to make time to visit the Equals set and keep a watch over Nick.”

Aw, really? We can’t imagine JLaw to be so protective, and poor old Kristen has been single ever since the drama with Rob Pattinson! A pal of Lawrence’s apparently told Gossip Cop that the story isn’t true, labelling it as “ridiculous” and it looks like Nicholas and Jennifer are totally head over heels for each other moment, particularly after they went to the Golden Globes together.

The Warm Bodies star recently said of his girlfriend: “She deserves it all. It’s fun to watch.” He also mentioned that Jennifer had read the script for Equals. He continued: “We both loved the script. It’s epic in proportion, but centred on these specific relationships.”

Does that sound like the behaviour of a green-eyed monster to you?

It sounds like Kristen Stewart is very anxious about her new role as well, as she said: “I can’t believe I agreed to do it. I’m terrified of it. Thought it’s a movie with a really basic concept, it’s overtly ambitious. In Equals, things go wrong because you can’t deny the humanity in everyone. It’s the most devastating story…I’m scared.”

It sounded like Jennifer Lawrence was initially in the running for the role though, as the director Drake Doremus said: “Jen and I worked together before and she was fantastic. It’s exciting to talk about the character with different people, but it became evident in my head that Nick and Kristen would have great chemistry.”

Would you be annoyed if you were Jennifer? Tweet us @sofeminineUK