Joey Essex may have lost I’m a Celebrity…Get Me Out of Here, but it sounds like he is absolutely winning in his new relationship with Amy Willerton. Although there are several cynical rumours that it’s all a bit of a publicity stunt, it seems like the two of them really are enjoying each other's company as Joey happily chats away about her in an interview. However, apparently Sam Faiers wants him back – what’s an Essex boy to do?!

Joey Essex has been chatting away about his new relationship with Amy Willerton, and we found out all of the gossip!

In an interview with Heat magazine, Joey gushed about his life post-Australian jungle after winning the public’s heart with his loveably dim ways. Most excitingly, he talked about his elusive (lol) relationship with his new girlfriend, Amy!

Latest News
I'm A Celebrity...Get Me Out Of Here! 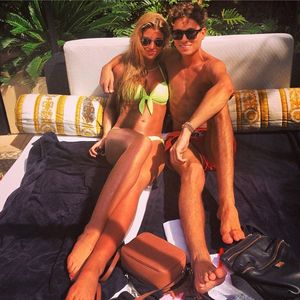 Whilst chatting to the magazine, Joey received a picture message from message of a snap of her at a modelling shoot. They’re sending cheeky selfies to each other, that must mean something, right? RIGHT?!

Joey seems pretty pleased with himself either way. “I’m the happiest I’ve been in ages,” he said.

“It sounds weird, but I think I went in a boy and came out a man…I just enjoyed my time in there. And when Ant & Dec said my name and that I was leaving with Amy, I was so happy. It was like it was fate and we could properly be together.”

So why didn’t anything happen whilst they were in the jungle then? According to Joey, he does have some standards as far as hooking up in front of millions of viewers are concerned.

He said: “We knew millions of people were watching, and I feel like we liked each other too much for that. When we came out it was instant, it was really intense. We were all over each other!”

Sounds like this one’s going to result in a 25-year-marriage. Definitely.

Once he started talking about his relationship with Amy, there was no stopping him! He continued to chat about the first time they kissed.

“The first night we just started talking about how much we liked each other. It could’ve easily happened that night, but it was the next night and then we were sayin’ something! You know what I’m sayin?!”

“We watched a film and then we were talking and our faces got really close and we just kissed. And then I said ‘I’ve wanted to do that for a little while now,’ and she said ‘I feel the same.’ And then we started kissing again.”

Aw, that’s quite nice! He soon went into overkill though, saying: “She actually is a nice, genuine girl. There’s not many girls like her out there. I’ve never met anyone like Amy – she really is in a different league. She’s very different to any girl I’ve ever met and I like that about her. My dad really liked her, too.”

Seriously Joey, you have NOT known her that long! The Only Way is Essex star also shot down his ex-girlfriend Sam Faiers, despite the fact she has publically admitted that she is upset with his new relationship.

​He said: “Things didn’t work out between me and Sam. It’s a shame, but that’s it. That’s the reason I finished it with her…I would never compare Sam to anyone, but Amy’s like the girl I’ve been working for...and I’ve finally found her.”

Do you think the love of Joey and Amy is for real? Tweet us @sofeminineUK

by the editorial team
+
All the news about I'm A Celebrity...Get Me Out Of Here!