Prince William and Kate Middleton have their hands full planning the christening of their son Prince George. They reportedly want the very special occasion to be an “intimate family affair,” but even so their guest list has allegedly caused ripples of offence within the Royal Family, as even some key family members have been left off the invite list!

Kate Middleton and Prince William are breaking away from the traditions of the Royal Family and doing things their way, even if that means upsetting those closest to them.

The notoriously private couple have been busy planning the christening of their 3-month-old baby George, which is set to take place on 23rd October.

According to the MailOnline, the Duke and Duchess of Cambridge are keen for the service to be “an intimate, family affair”, and so are carefully editing the guest list to be as small as possible.

As a result they’ve omitted a number of royal relatives, but no one expected that the prince’s aunts Princess Anne and Sophie, Countess of Wessex; and uncles Prince Andrew and Prince Edward, would not be present at the baptism.

Their immediate family, Prince Charles, Camilla Duchess of Cornwall, Michael and Carole Middleton, and great-grandparents the Queen and the Duke of Edinburgh will attend.

As will Kate’s brother James, sister Pippa, and William’s brother Prince Harry, who is favourite to be named godparent.

Allegedly upon seeing the initial guest list Prince William realised that he “hardly knew anyone on it,” and so the source explained that he decided to rewrite the list from scratch including only their nearest and dearest.

Bucking yet another old royal tradition, Kate and Wills have also decided not to hold the christening at Buckingham Palace as is custom.

Instead baby George will be baptised at the “small, intimate and personal” setting of Chapel Royal in St James’ Palace, according to royal insiders.

The Archbishop of Canterbury, the Most Reverend Justin Welby, will preside over proceedings, and Kensington Palace have confirmed: “The christening will be predominantly a private occasion but there will be parts of it where photos and footage are released.”

Do you think Kate and Prince William are right in excluding family members from proceedings? Tweet us @SofeminineUK! 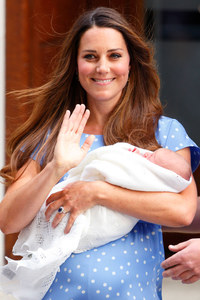