Kate Middleton seems to be adapting well to her new role as a mum. Not only has she chosen to breastfeed baby George, she's also ensuring her son is not given a dummy. Meanwhile, Prince William is loving being a dad - and is even happy to change nappies!

Kate Middleton is said to be breastfeeding her new baby son.

The Duchess gave birth to George Alexander Louis on 22nd July and is quickly adapting to life as a mum.

Just like Princess Diana did with Princes William and Harry, Kate has chosen to breastfeed her son rather than use formula milk in a bottle.

A royal source told the Sunday People: "I gather there were some difficulties at first - there often can be, as new mums can get a little tense.

"But after some help from the midwife, they both caught on very quickly. As far as I can tell, Kate finds it very relaxing and George is just like any other little baby.”

It seems Kate and her husband Prince William have a rather vocal son on their hands.

The source continued: "It would be fair to say that Prince George has a healthy appetite. He is a very hungry little boy.

"He can’t get enough. And they all certainly know when he’s hungry - his screams are very difficult to ignore." 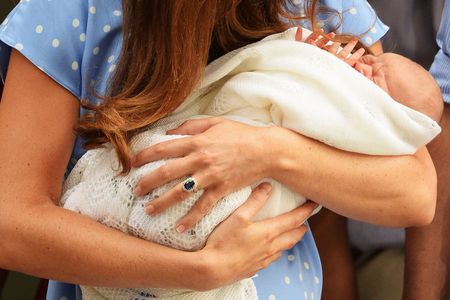 After George's birth the couple, both 31, spent a night at Kensington Palace before leaving for Kate's parents' house in Bucklebury, Berkshire.

The frock costs £50 and is designed especially for new mums who are breastfeeding.

As well as choosing to breastfeed her little boy, Kate is adamant that her son is not allowed a dummy.

Staff at Kensington Palace have reportedly been told by Kate and Wills that their baby son should not become reliant on a dummy.

It sounds like Will and Kate just want their new heir to have as normal an upbringing as possible.

A source said: "William wants to do all those thing that any other dad would do. He wants to push the pram and help with getting his son dressed - and, of course, change George’s nappies."