Katie Price has been rushed to hospital

Katie Price was rushed to hospital last night after feeling ill in the early hours of the morning, and has been tweeting from hospital since. The former glamour model had been complaining about feeling ill all week, but apparently this came to a head in the early hours of Sunday morning. We hope you get well soon Katie, and you’re all well again in time for Christmas – no one likes being poorly, especially when there is so much food, mulled wine and Quality Street to be had!

Katie Price was rushed into hospital in the early hours of Sunday morning after complaining that she hadn’t been feeling well for days.

Back on Wednesday she wrote: "Feeling sooo poorly still, im just not getting better doctors again this morning

." It must have been steadily getting worse though, as Katie then tweeted later in the week: "Still soo poorly problem getting worse no meds are helping such s*** times 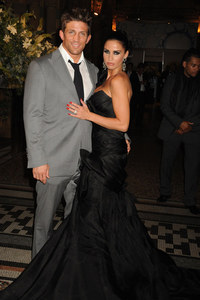 It seems like things went from bad to worse for the mother of four, as she finally tweeted that she was in hospital, writing: “Great in hospital on a drip.”

She finally tweeted that she was out of hospital but needed to go back on Christmas eve for a MRI scan – poor Katie! She wrote: "Out of hos go back again in 48 hours mri scan had morning of needles my worst nightmare, time to concentrate on getting ready for christmas (sic)."

Aw, it’s never nice to be ill, but it’s so much worse over Christmas! Those presents to Harvey, Junior, Princess and baby Jett won’t wrap themselves!

Katie has also put her custom-made bright pink Range Rover up for sale, presumably to make someone else’s Christmas fabulous – so she needs to get busy selling that as well!

However, we get the feeling that her hubby of nearly a year Kieran Hayler will be roped into helping out with all the Christmas plans – we’re sure he won’t be complaining though!

Have you ever been poorly over Christmas? Tweet us @sofeminineUK