Katy Perry has confessed to taking up to 26 pills a day in an interview. She also reveals several other unusual traits about herself including her OCD, her belief in aliens and her hoarding habits. Should we be worried? Compared to the rest of her slightly eccentric tendencies, the pill popping seems almost relatively normal as said pills are actually vitamin supplements, with the singer stating “I’m all about vitamins and supplements."

Katy Perry has admitted to popping 26 vitamin and supplement pills every day, telling Us Weekly: “I’m all about the supplements.”

The Prism singer confessed several strange and unusual facts about herself for the magazine’s 25 Things You Don’t Know About Me feature.

In the column, she chats about her ticket to outer space, how she believes in aliens, travels about with her teddy and brushes her teeth up to six times a day. Katy was clearly in the mood to share...

A little more seriously, the Roar admits to having OCD, an anxiety disorder that produces obsessive and compulsive behaviour.

The 28-year-old jokes: “I’m so OCD that I wish the letter OCD were in alphabetical order - CDO.”

That would explain the excessive teeth-brushing then!

The singer also revealed her hoarding tendencies, telling the magazine: “Everyone in my life seems to think I’m a hoarder, but if you ask me, I’m a collector!”
​
On a lighter note, Katy - who is currently dating rocker John Mayer - shares the news that she is soon to be an aunt, though she doesn’t specify whether it's her brother David or sister Angela that's about to become a parent.

Although the Grammy winner is extremely healthy with her vitamin intake, she admitted that her favourite food isn’t exactly celery, which is much more up our street.

“My comfort food is chicken nuggets, but only the boot-shaped ones,” she said. “My favourite ice cream is Cold Stone Creamery’s Birthday Cake Remix.”

Did anyone else realise Katy Perry was so strange? We certainly didn’t!

What do you think is Katy’s weirdest revelation? Tweet us @SofeminineUK 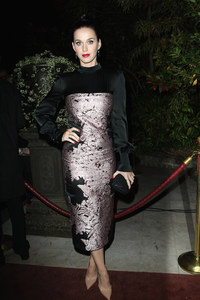