Kelly Osbourne celebrated her birthday is style this year, and had the world’s most annoying couple appear at her party – in miniature! Yes the Fashion Police presenter had the tiny version of Kim Kardashian and Kanye West at her 28th birthday party, where they recreated Kanye’s ridiculous – I mean wonderful – proposal to Kim, which Kelly reportedly found hilarious. We wonder what Kimye will think when they find out?

Kelly Osbourne celebrated her birthday this week with mini-versions of Kim Kardashian and Kanye West appearing at her party.

The purple-haired birthday girl reportedly found it hilarious as they recreated Kanye’s over the top marriage proposal.

A source told E! News: “Surrounded by a big group of friends, Kelly sat in the middle of the club and was treated to an extra special performance by her pal and showman Jeff Beacher.

“Jeff re-enacted an important pop culture moment for Kelly. He had a mini Kim and Kanye come out onto the stage. Mini Kanye sang a song to mini Kim, and then he got down on one knee and proposed to her.”

The source continued: “Kelly couldn’t stop laughing. It was hysterical. She loved every minute of it.”

Kelly was then given her birthday cake, one she appreciated this time as opposed to the one Lady Gaga gave her.

​Her cake featured pictures of her famous friends including Taylor Swift and Miley Cyrus, who, for saying they were all best pals, were noticeably absent from the party.

Among the gang who did show up were Paris Hilton, Nicky Hilton and Dave Chappelle.

We’re glad Kelly’s having a bit of fun since last week’s ruckus with Lady Gaga, in which Kelly rather rudely rejected the Bad Romance singer’s offer of her birthday cake, telling her to “eat my s**t”.

However the The Osbournes star has eaten her words (but not her birthday cake, chortle) by admitting her fault to Gaga and asking to speak to her in private, tweeting:

“@ladygaga I acted like a child last night. Just not into publicity stunts call me & we will end this like adults I don’t want 2 fight anymore.”

So it was a week of birthday drama for Kelly then! 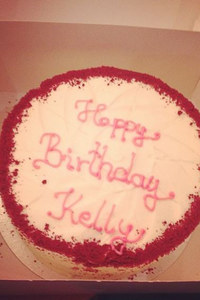