Kelly Osbourne has had some very public celeb fights with Lady Gaga and Christina Aguilera, but through it all Miley Cyrus has always had her back. But not any longer according to reports, as it’s claimed that the BFFs have had a spectacular falling out due to Miley’s controversial new makeover.

It looks like angry mothers aren’t the only ones who are upset with Miley Cyrus’ antics.

Kelly Osbourne reportedly isn’t too happy with her best friend, but it’s not because of her recent questionable fashion sense or penchant for twerking.

Allegedly the Fashion Police star is furious with her former BFF because she thinks she is glorifying drug use.

“Kelly’s a recovered addict, as are a few others in her family, so she really takes sobriety seriously,” a source tells Now magazine.

“She ripped into Miley after she gave an interview to Rolling Stone glorifying pot and MDMA. Kelly told Miley she needs rehab.”

But the Bangerz singer doesn’t seem to care that she’s upsetting her reality TV star pal, even uploading to social media a snap of her wearing a top that features a photo of Justin Bieber smoking a joint.​

There are cannabis leaves surrounding his head and the words ‘Reefer Fever,’ which is a play on the popular phrase we all know and love, ‘Bieber Fever.’

The former Disney star even addressed the tweet to Justin, captioning the photo: “FO LIFE.”

Miley quickly deleted the picture, but it’s not known whether it was due to a telling off from Kelly or because Justin Bieber’s people freaked out over him being linked with marijuana.

In any case it looks like Kelly has had enough of Miley at the moment.

After Twerk-gate at the MTV Video Music Awards, Kelly said: “Miley’s my friend and I love her and I have her back no matter what, but I’m going to tell her – ‘Put your f***ing tongue in your mouth!’”

Do you think Kelly is right to be mad with Miley? Tweet us @SofeminineUK! 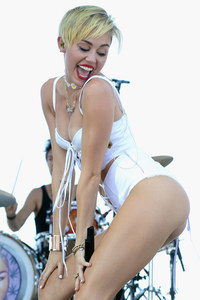