If Kim Kardashian’s engagement to Kanye West is any indication, we know for a fact their wedding is going to be nothing short of wonderful. BIG and wonderful, that is. With tons of speculation about what the ceremony will be like on the day, momager Kris Jenner finally speaks out.

Watch out Hollywood! Kim and Kanye are set to throw one hell of a wedding.

The love duo who got engaged on Kimmy’s 33rd birthday in October have got their pens and notepads out for the preparations of their grand nuptials.

According to momager Kris Jenner, their wedding is going to be big, lavish and visionary.

The matriarch told People.com: "We have a pretty big family. I don't think it will be two people in a chapel, if you know what I mean!"

As mums do, we thought Kris would've had a say in prep for their big day, although we weren't sure how involved she'd be when it comes to this power couple. Kris admitted the newlyweds have yet to ask for her input in the wedding-planning process.

She said, "I don't know if they'll let me jump in. That's two very creative minds getting together and they definitely have their own ideas."

So when will the highly anticipated nuptials take place?

"Hopefully it will be soon,” she added.

Kim recently shared her hopes of a small ceremony on a private island after being criticised for her extravagant wedding with ex-husband, Kris Humphries.

The lovebirds are currently calling Kris’ house in Calabasas, California home while their Bel Air estate is being renovated. Kris has been more than happy to welcome her daughter and son-in-law-to-be into her home, explaining that watching the couple bond with Nori has been the “most special and amazing thing.”

She explained: "The whole way it evolved has been a dream come true for me, as her mum and ... North's grandmother. Our house is blissful.

"​To watch Kim and see her mature and grow and turn into the most delicious mother, who is interested and engaged and reads to her every day, and if she works, brings North with her - it's very cute the way she doesn't want to be apart from her."

She continued: "And Kanye adores both of them. The way he speaks of them, it is so delicious and I can't explain how in love with them he is. It's really sweet to watch."

Kimmy recently said that although Kris and Bruce Jenner are separated, Bruce WILL definitely be walking her down the aisle for the big day.

This will be Kim’s third wedding to date, and a first for the Yeezus singer. We’re wondering who's going to have the final say in the big wedding plans...

Who do you think it’ll be? Our money's on Kanye. Tweet us @sofeminineUK 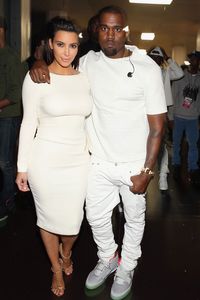