We assumed Kanye West would be giving Kim Kardashian something fabulous for Christmas – we were thinking diamonds, cars, small islands that have his collection of albums permanently playing on a loop from every speaker, that kind of thing. Instead, Kim has instagrammed a snap of her present and it has decidedly divided opinion. On one hand, it’s a one off hand painted George Condo Hermes bag, on the other hand, it’s really, really weird.

Kim Kardashian has revealed her gift from Kanye West on Instagram, and it’s really quite strange.

The reality tv show star, who has been delighted instagramming pictures of her daughter North’s Christmas presents, showed off her own unusual treat from Kanye West.

The present – are you ready for this – is a leather Hermes bag hand painted by contemporary artist George Condo.

The picture shows two naked figures with something that looks like a monster in the background. We told you – weird.

To be fair on Kanye though, we know it can’t be easy to shop for a Kardashian, and at least he bought his fiancé something thoughtful and unique!

It may have been that Kim was already a huge fan of the artist as well, as George was asked to create a series of pictures for Kim’s fiancé’s fifth studio album My Beautiful Dark Twisted Fantasy, in which he appears on the cover as naked whilst being straddled by a female with no arms. We…we don’t get it.

So how much do we think Kim’s brand new erm…artistic…bag sold for? Apparently the huge Hermes bag would have cost about £10,000, and one of George’s pieces just sold for over £780,000. Whoa. For that bag? Really?

However, fans were obviously less than impressed by the work of art/handbag. One user of the picture sharing site wrote: “my 4 year old nephew could paint something better than that.”

Another user wrote: “probably the ugliest thing I have ever seen.”

Don’t hold back people, let her know what you really think!

This isn’t the only surprise Kanye has given during the merry season though, as he has recently promised to stop ranting. Let’s face it, he’s been doing it an awful lot this year.

According to The Mirror, Yeezus told the crowd at one of his gigs: “Everything I'm saying that's not allowed, soak it in right now ... this might be the last time y'all hear me talk s**t for a long time.

“Might be another like six months. At least. You're just gonna have to run back [my past] interviews and s**t if you wanna hear some realness!"

Nah that’s okay Kanye…we’d rather forget they ever happened!

What do you think of the handbag? Tweet us @sofeminineUK 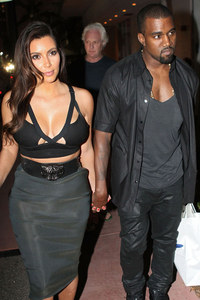