Hell hath no fury like a woman scorned, PARTICULARLY When the woman in issue is the form glamor model Katie Price business entrepreneur. The 35-year-old Began legal proceedings contre her ex-husband Peter Andre in 2012, Claiming That Peter and her manager Claire Powell train Were selling stories about her. Apparently the box HAS run into trouble and Some Could Be Thrown out of court, leaving Katie In Some serious financial trouble.

Katie Price Began legal proceedings contre Peter Andre and Claire Powell back in 2012. Claiming que la par Was selling false stories about her to the press, an accusation That They Both deny. HOWEVER, selon postponements the box May be Thrown out of court, Apparently as Katie's lawyers About did not exchange witness statements. If the box is Thrown out and the short Does not grant her relief this means clustering That Could Be Katie left bindable not only for her own legal bills, goal aussi Claire and Peter's expenses. That has got to hurt.

Katie Price "secretly dating" Charlotte Church’s ex Gavin Henson
Perma-tanned Katie Price is said to be secretly dating Charlotte Church’s equally orange ex, Gavin Henson. The pair have reportedly been sending each other private messages for weeks, before the newly-single glamour model decided to step things up a notch by agreeing to go on a date with the 30-year-old Welsh rugby player. According to The Mirror, they met at celeb haunt Mahiki on Tuesday night for the London club’s Christmas party. 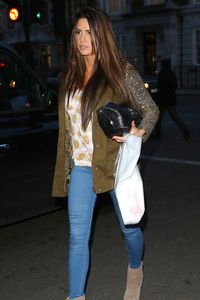 Told A source Heat magazine: "Katie has-been Warned That if the box gets struck out front She Could Hundreds of Thousands in legal costs. She Thinks She Could-have made ​​a major mistake. "Media lawyer Adele Ashton gave her opinion, and said:" If a claim is struck out, the claimant is usually ordered to pay the defendant's costs. In a case like this, qui has-been going on for two years Nearly, the costs and substantial businesses Would Be Even Could run into several million. "The form glamor model is thought to be worth around £ 45 million. HOWEVER, selon her last annual return of her companies Jordan Trading and KDC Trading, the value is now worth less than £ 150,000. Her books are Reviews another huge source of wealth, and she is in the top 100 best-selling authors of the decade , aim it is no secret That Katie Price lives an expensive lifestyle, and it looks like if thesis costs are added up, the 35-year-old Could Have some serious trouble scraping the money together for her legal bills. Jordan About did Previously earn Some serious cash from her reality TV shows, she intended Currently Has No shows in production. The source Revealed: "Katie is not making the kind of mega-même That She used to money and the pressure is really building. Kieran [Hayler] feels like this legal battle is a permanent cloud hanging over Their wedding. She Was Convinced Would she win at the start. Now she's petrified Pete is going to-have the ultimate revenge over her. "Meanwhile Peter Andre has-been, you know, getting there with His Life, and annoncé just l'autre day That His newborn daughter with fiance Emily MacDonagh has-been called Expired Amelia. Cute! Do you think Katie Price will win her case contre Peter? Tweet ussofeminineUK