Lily Allen has been on a bit of an extended break since popping out two sprogs. But now the Smile singer is set to make a comeback to the music scene and has reportedly landed the highly coveted John Lewis Christmas advert gig. Which basically means she’ll be the soundtrack to this Crimbo and we won’t be able to turn on the TV without hearing her singing. Congrats Lily – we’re glad you’re back!

Lily Allen will be the soundtrack to the John Lewis advert, a job previously held by pop star Ellie Goulding, Gabrielle Aplin and Slow Moving Millie.

It’s a good way to mark her comeback after being away from the pop music scene for over three years.

In recent years the unveiling of the department store advert has become quite the annual Christmas event, with a sob-worthy story soundtracked by plinky plonky piano music and pretty female vocals.

Lily will clearly be hoping to replicate last year’s much-loved John Lewis advert which notched up millions of views on YouTube.

Called The Journey, the Christmas clip was sung was a cover of Frankie Goes to Hollywood's Power of Love sung by 20-year-old Gabrielle Aplin.

Like previous years the song will be a cover, and rumour has it Lily has already recorded her own take of Keane’s hit song Somewhere Only We Know – most likely slowed right down to make it even more emotive and tear-jerking.

It’s a smart move for the Alfie singer as the ad will obviously be on heavy rotation over the Christmas period.

It’s also perfect timing to promote Lily’s new fourth album, which is expected to drop in the New Year.

When grilled earlier this year about missing her pop star job, the mum-of-two candidly admitted: “I didn’t actually. I had no intention of doing it again.”

“Being a mother is great but if you are creative you have that urge to get back out. There’s only so much kids’ TV and playing with Lego you can do before you go insane.”

We for one are pretty excited about her highly-anticipated return to music. And we CAN’T WAIT to check out the 2013 John Lewis Christmas advert.

Are you as eager as us for Lily’s comeback? Tweet us @SofeminineUK. 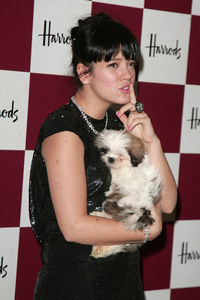