12 Movies That Lied To Us About Life In London

by Emmy Griffiths Published on 15 October 2015 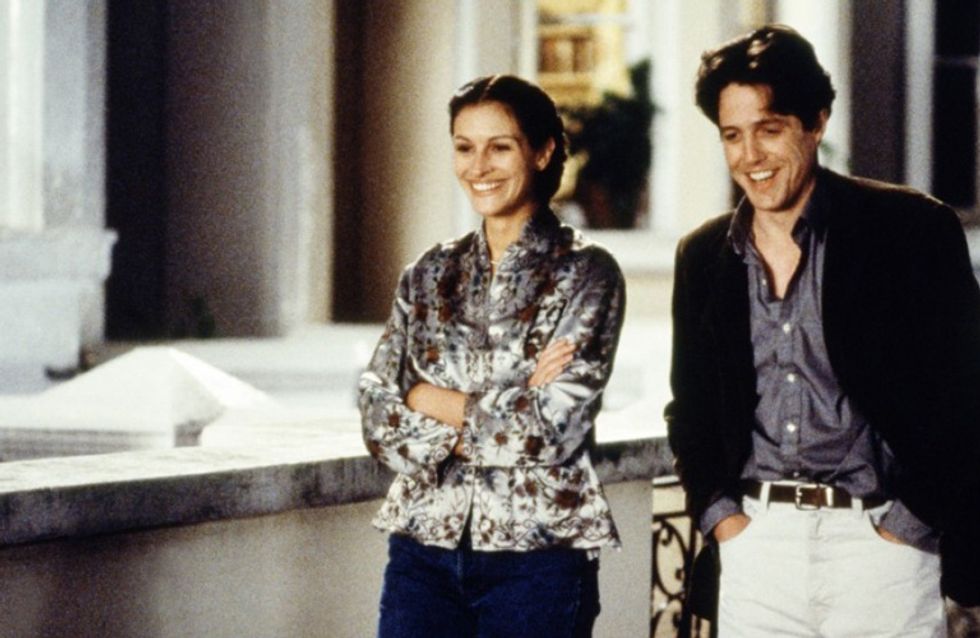 In many movies (most of which are written by Richard Curtis), London is a charming, aesthetically-pleasing dream filled with affordable housing, Rolls Royces and no traffic. Since our perception of London is oh-so-slightly different, here are all the ways the movies have LIED TO US about our great capital over the years.

No wonder we wanted to move here as kids, and look where it's landed us! Where is Hugh Grant? Where is our pretty terraced house with pillars and little pot plants? WHEN IS SOMEONE GOING TO TAKE US TO THE IVY AND MAYBE EVEN THE RITZ ON A DATE?! Here are the things that are amiss in London-based movies...

Expectation: You'll meet the love of your life on the streets. You will move her into your house in Notting Hill, which you finance by running a travel book shop that never makes any money, and there the two of you will thrive, chilling out in parks and attending Premieres and such, never to be bothered again...

Guys, today I read an interesting article from Daily Mail. About Hugh Grant and Colin Firth hahaha. It's really funny and I want to share with you guys later ;) Wait for it LOL

Reality: Good luck getting near ANYONE famous. When they're not in cars, they are being mobbed. They are not travel book shopping in Notting Hill. Also, HOW is he affording that house exactly? He cannot possibly afford it!

Expectation: THIS is the guy who lives at 10 Downing Street. He dances in his underwear, makes intelligent decisions for Britain against pervy American Presidents and falls in love with his potty-mouthed but loveable tea lady. HEART EYE EMOJI.

A photo posted by Politics International (@politics_international) on Jul 15, 2015 at 9:05am PDT

Expectation: There are rich and eligible bachelors with awesome houses. They do nothing, but you also love doing nothing. He will support you and will be home when you return from work, and could not be more thrilled than to spend the evening watching like, twelve hours of Gossip Girl with you.

Shaun of the Dead

Expectation: You will be able to go into a nice, quiet pub, have a pint and wait for this ALL to blow over. That's what Shaun of the Dead is all about, right?! It might not be the classiest areas of London, but at least it's quiet, discreet and you can ride out a good old fashioned zombie apocalypse by scoring a table at your favourite pub and helping yourselves to a few pints.

Reality: You listen to me and you listen good. You will not be able to barricade yourself in a London pub in reality. YOU WON'T BE ABLE TO GET THROUGH THE BLOODY DOOR. Do you know how many people would have survived that zombie apocalypse and would proceed by getting hammered in a pub? EVERYONE. This is Britain, and drinking our feelings is the only thing that makes any sense! Shaun and his gang would NOT have been alone in that pub. They would have tried to get in, realised it's way too crowded then settled with standing up in the beer garden.

I'm in London and it's Friday night. "I know! I'll jump on the Tube and pop down to Covent Garden for a quiet pint," me thinks. In London...on a Friday night... Thankfully it was a nice night for a walk! Back to Bayswater for that pint. (Pic - Pub/bar at Sicilian Avenue, near Covent Garden) #coventgarden #london #fridaynightout #fridaynight #sicilianavenue #quietpint #bayswater #travel #busypub #fridaynightbeers

Expectations: You can air your grievances with your fellow man in a beautiful Victorian fountain. In Bridget Jones: The Edge of Reason, Mark Darcy and Daniel Cleaver have no trouble fighting out their feelings, and are even encouraged to do so (especially when Darcy drowns Daniel in sixteen inches of water, classic). From this you take away that London is a place where two gentlemen may fight over their lady in the old-fashioned way: while wearing white shirts and getting soaked to the skin. #ThankYouMovieGods.

How can you not love these two!!! They're the best on-screen frenemy ever

Reality: Move along, there is roughly one member of the Metropolitan police force per street who won't stand for such draconian nonsense. They would have been pulled out of that fountain and put in prison to cool off overnight before any female spectator could even whip out her camera phone in time to share the gift with the world. Sad times.

Expectation: Get a job as a marketing assistant and you will be able to afford THIS apartment by London Bridge. You can live your singleton existence there, financially able to support yourself, will pay all bills on time and go partying with your other single mates every night of the week and of course it never takes long to get home, you're already in zone one!

Reality: HERE'S YOUR NEW STUDIO APARTMENT ENJOY THAT'LL BE EVERYTHING YOU EARN PER MONTH PLZ.

Expectation: Magic is just around the corner. With just some taps of a pink umbrella, we can finally go get those robes fitted at Diagon Alley, the magical part of London filled with wizards and wizardly goods. We read so much about them growing up, it seems that the Leaky Cauldron should exist in London. How could London be London WITHOUT it?! We also know what happens when you run at the barrier between platforms 9&10 at Kings Cross Station, and that it that you will end up on the Hogwarts Express, finally buying those coveted chocolate frogs from the train's trolley lady and chilling out with your BFFs.

"I was told that Jo Rowling came onto the set of Diagon Alley on the first film, and that she just stood there, almost with a tear in her eye, because it was exactly as she had imagined it from the book." - Stephenie McMillan, Art Director #TriviaTuesday #HarryPotter

Reality: There is no secret wizard shopping street behind a brick wall and if you run at platforms 93/4 at Kings Cross you won't get to Hogwarts, you'll just get a concussion. We're so sorry. It hurts us too.

Expectation: You'll be sipping champagne on the London Eye before gliding back to your penthouse in Brighton within the hour. Wimbledon paints a gloriously gorgeous picture of London during Wimbledon season; full of Pimms and tennis in the sunshine and car rides that actually last for longer than one minute (through Trafalgar Square, mind you), without hitting any traffic whatsoever.

Expectation: If you are lost or alone, an upper class family will bring you home to their beautiful house and let you live with them forever, even though you are chaotic, get yourself into all kinds of trouble and have an odd passion for marmalade. Oh yeah, you're also a bear.

Reality: Best just to snooze on the tube instead and find yourself a flat share. Maybe Londoners are just nice to bears.

Expectation: You will meet Thor on the tube.

Reality: You will not meet Thor on the tube.

What A Girl Wants

Expectation: Colin Firth is a typical member of the House of Lords. He is also running for the House of Commons instead because he doesn't think politics should be a birthright. The arrival of his illegitimate daughter only improves his cause, he makes it into the right House and they all live happily ever after in his manor house.

Expectation: London is filled with cloak and dagger mystery, opium dens, top hats and quick-witted detectives who say ever-so-British tidbits such as 'Elementary, my dear Watson'.

So yeah, London huh? Fun. Tweet us your thoughts at @sofeminineUK.

This article was written by Emmy Griffiths. Tweet her at @Emmyfg. ​