Lorde has taken the music world by storm, with hit song Royals off her Grammy-nominated album Pure Heroine. But is she now taking rival Selena Gomez’s place as Taylor Swift’s best friend? Lorde stood beside Taylor at the country star’s 24th birthday party, but Selena was suspiciously nowhere to be found at her former bestie's celebrations.

Remember Lorde’s nasty comment about Selena Gomez? Here’s a hint, it involved pretty much calling her an anti-feminist for her song “Come and Get It.” Ouch!

Selena sassily, yet maturely, responded in kind, saying, “…in my opinion it’s not feminism if you’re tearing down another artist.” And the feud continues.

Now it seems Selena may be in for another slap in the face. Everyone’s favourite country princess, Taylor Swift, celebrated her 24th birthday on December 13th, and the former Disney star - who is always by Taylor's side - was conspicuously nowhere to be found.

But guess who was there, partying and hugging it out with Selena’s best friend: none other than Grammy-nominee Lorde.

The chart-topping singer has not just targeted Selena in her rash, uncensored comments; she has taken aim with her brutal honesty at artists like Lana Del Ray and Miley Cyrus. The only artist she seemingly hasn’t criticised is Beyoncé!

Taylor posted pictures of her birthday shindig on her Instagram page, and Lorde was there, partying it up and having a grand time alongside Swifty.

So, why was Selena MIA? Maybe she heard that Lorde was going to be at the birthday party and decided she would not be. Who knows. 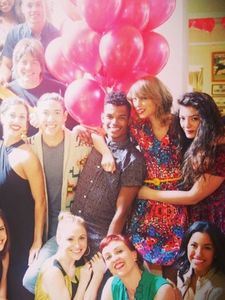 Though the famous besties, Taylor and Selena, have stuck together through thick and thin, it seems that a fellow singer may be the one to tear them apart.

When Selena and cutie gone bad boy Justin Bieber broke up, Taylor was there. When Taylor was struggling to get over Harry Styles, Selena was there. But is this birthday party betrayal one thing Selena can’t forgive?

What do you think? Has the feud between Lorde and Selena gotten overblown? Is Taylor and Selena’s friendship on the rocks? Tweet us @sofeminineUK!