There's certainly no love lost between Lucy Mecklenburgh and Tulisa Contostavlos. The girls fell out last year over FHM's Sexiest Woman In The World party, and it seems Lucy still hasn't forgiven the N-Dubz star. In fact, she had some pretty tough talk when the subject of Tulisa arose in her interview with FHM!

Lucy Mecklenburgh has hit out at Tulisa Contostavlos in a new interview.

The stunning TOWIE star has whipped her clothes off (again) for FHM magazine and made it clear she still hasn't forgiven Tulisa after they fell out last year.

The brunette reality star was upset last year when she was allegedly banned from the FHM Sexiest Woman In The World party by Tulisa's team.

Former X Factor judge Tulisa - who topped the mag's Sexiest Womean poll in 2012 - had reportedly ordered for 67th place Lucy not to be allowed in to the event because she's a TOWIE cast member.

Lucy tweeted at the time: "People need to remember where they come from!!!!! I'm soo upset."

A source told the Daily Star: in 2012: "She was told if she turned up Tulisa wouldn't be allowed to and they really needed their winner at the event.

"It was a massive slap in the face seeing as she had made their list."

Earlier in the day Lucy had tweeted: "So flattered that I'm in #FHM100sexiest in the world !!!! I can't believe it !!! Can't wait for the party tonight!!xx."

But it was later denied that Tulisa was responsible for banning Lucy from the party, as FHM said in a statement: "In line with the ongoing evolution of the FHM brand and our world-famous sub-brand ‘100 Sexiest Women in the World’, a decision was made by FHM to restrict the over-subscribed guestlist to this week’s 100 Sexiest party.

"Regrettably this resulted in Lucy Mecklenburgh not being able to attend the event."

Now it's 2013, we doubt Lucy is too bothered - while Tulisa, 25, has disappeared from the limelight following drug supply allegations, the TOWIE star is a media regular.

She recently beat off competition from Rihanna and Beyoncé to be voted best bikini body of 2013 and she is receiving recognition for her diet and exercise programme, Results With Lucy.

She told FHM about why she's so committed to keeping fit: "I like having a nice bum. I put a quote on Twitter the other day. It said, 'I work out for my health so I can live long... Who am I fooling? I work out so my ass will look banging in jeans."

Lucy was also recently in Los Angeles to meet with a film director - although she insists she won't be leaving TOWIE any time soon. 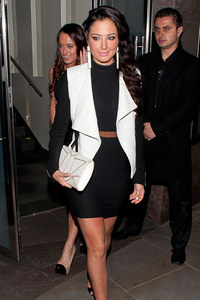 Esme Riley
…
Feud
From hair ideas to outifts, look no further for your daily inspiration