The Made in Chelsea boys hilariously rocked up to the Anchorman 2 film premiere in London last night in full News Team garb, complete with wigs and moustaches. Of course they did! We’re guessing it was Jamie Laing’s idea. Olly Murs also had the same idea though, and enjoyed himself on the red carpet rocking a wig and a ‘tash. Looking good guys...

The boys of Made in Chelsea seemed to be thoroughly enjoying themselves last night as they attended the Anchorman 2 premiere clad in full 1970s style costumes.

The gang – Jamie Laing, Francis Boulle, Spencer Matthews (ugh) and Oliver Proudlock posed proudly in their matching wigs and moustaches, which Spencer then posted to Twitter with the caption: “Epic time at the Anchorman 2 premiere with the boys. #NewsTeamAssemble.” 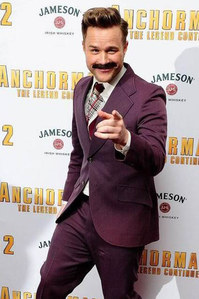 Jamie also took to Twitter to talk about the premiere, though if you haven’t seen the first – extremely quotable – film you may have missed it. He wrote: “I love scotch. Scotchy scotch scotch. Here it goes down, down into my belly.”

The McVities heir has probably thrown caution into the wind following Lucy’s rejection of his declaration of love from Monday night’s episode of Made in Chelsea.

The day after the episode aired Jamie tweeted his embarrassment about the rejection, hilariously writing: “So I had a dream I got shut down on National TV last night and then I woke up this morning and realised it was real.”

He followed that up with: “Not sure what's worse? The bandana or me crying on TV!” Accompanying the tweet with a snap of him weeping with a ridiculous orange bandana around his head.

We genuinely don’t know which is worse. This is going to become one of the Universe’s unanswered questions.

Last night’s premiere was also attended by MIC girl Lucy Watson, who apparently refused to take a photo with Jamie and avoided him all night. Still awkward then is it?!

Olly Murs also dressed up at the premiere as well as apparently had an amazing time as he tweeted: “What a film!! Increds!! Any extras for ANCHORMAN 3 we are your guys... #StayClassyLondon.”

The singer is a huge fan of Will Ferrell, and admitted last night that the two of them had even shared a shower together!

​He told The Daily Mail: “I met Will when we were doing Soccer Aid and I actually had a shower with him naked. It's one of the highlights of my career, that I had a shower with Will Ferrell. It was a beautiful thing.”

Are you looking forward to watching the Anchorman sequel? Tweet us @sofeminineUK