Our dear sweet Ed Sheeran won two awards at the Brit Awards last night, but this morning all anyone could talk about was Madonna's fall from grace as her cape was wrenched back. So let's take a look back at what else happened shall we?! Here are our favourite moments from the evening... 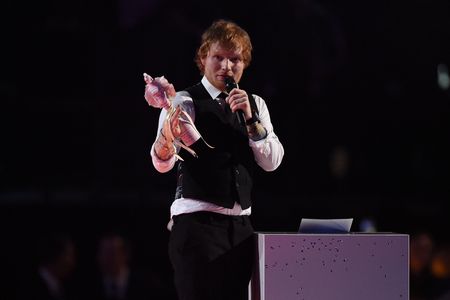 But the lady of the evening HAD to be Madonna. Although we all had a bit of a giggle at her spectacular stage fall (after we found out she was okay, of course!) But we have to give it to her: she recovered like an absolute pro.

It also probably means that her new single, Living for Love, is going to hit the top spot in no time. No such thing as bad publicity! Meanwhile, Taylor Swift was embarrassing herself in another, much more adorable way by dancing like no one was watching during Kanye West's performance.

Are we also allowed to obsess over Tay's performance? The choreography as she performed her hit Blank Space seemed like a cross between Michael Jackson and A Clockwork Orange, and we LOVED it.

The other star of the night, Paloma Faith, also gave everything on stage performing Only Love Can Hurt Like This. It may not be as well known as the above, but also worth a watch (be warned, it'll be stuck in your head for the rest of the day!)

We ended the evening with the man of the night, Ed Sheeran, who performed his new single, Bloodstream.

What was your favourite performance last night? Tweet us @sofeminineUK!

​20 Gifts For The Precious Ginger In Your Life