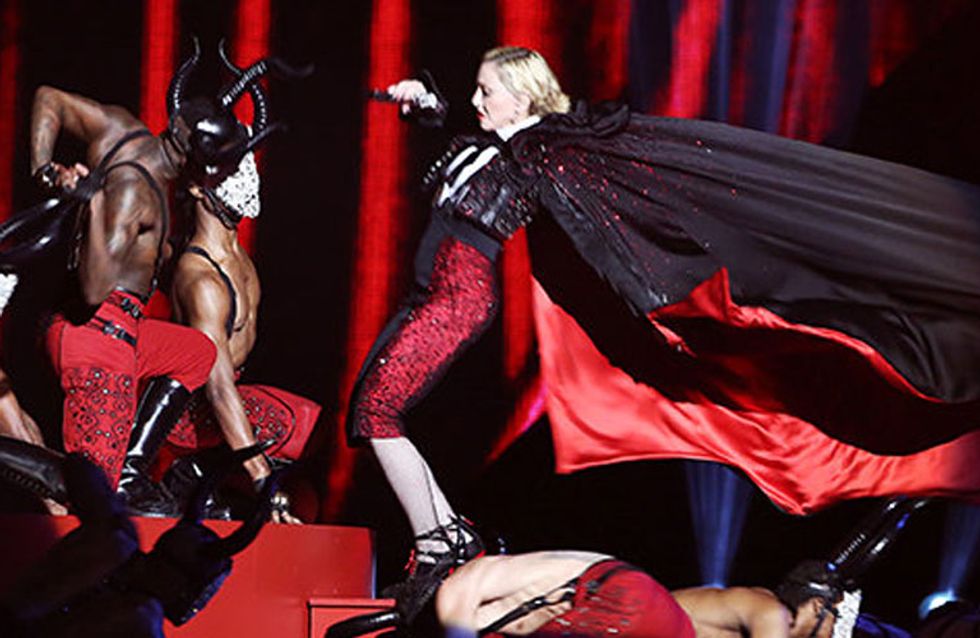 We know it’s wrong to take pleasure in other people’s misfortunes but when Madonna's dancers attempted to dramatically pull off her Armani cape at the Brits and ended up taking the rest of her with it, we couldn't help but have a bit of a giggle (after we found out she was okay, of course! We're not animals!) Madonna isn't the first, nor will she be the last to take a tumble of stage, so check out our favourite stage fails ever for your guilty pleasure...

The pop icon was meant to undo her cape but didn't do it quite in time, so she ended up literally being pulled down stairs. Fortunately she was FINE, but that didn't stop the broken hips jokes at the 56-year-old's expense. Least she can rest easy knowing she's more talented that we will EVER be!

Pink goes flying, swears like an absolute trooper, and the sneaky fan with a phone catches all of it. Hilariously, she was just about to start singing Rock Star…before stopping the show and having her entourage ease her out of her harness and take her shoes off. Very rock star Pink. Very.

Beyonce is the most professional diva ever. After tossing her hair around, she probably made herself a little dizzy as she began to walk down the steps, which was a bit precarious because she was wearing a floor length dress – and although you can’t see all that well as the audience block the camera after her tumble – it looks like she positively somersaults before getting back onto her feet and carrying on with the song without even missing a beat. Respect Beyonce!

BONUS: Only Beyonce can keep it classy after getting hair stuck in a fan.

There’s a price to pay when you run around being all sexy on stage RiRi, and that’s usually tripping over your own feet and flying forwards. The singer definitely sees the funny side of it and grins as she gets up, before switching her dancing moves back on – that’s the way to do it!

We couldn’t love Olly Murs more after he trips on his own bottle of water, laughs his way through a couple of lyrics of A Town Called Malice afterwards, then climbs the stage jokily - we hope - clutching his back as the audience laughs and cheers. What a guy!

The One Direction star had to do a runner at a gig in Pittsburgh. Apparently he had been boozing a little too much the night before, but apparently it was because he’d eaten too much before the show!

He said: “Everyone was saying I was hungover but I wasn’t, I was just too full.” Sure...because we all throw up after we've had Sunday Lunch...

You’d think climbing the human staircase of sweaty dancers would be the moment JLo took a tumble, but only when she lands on her feet and you think it’s all over, that it turns out it wasn’t the soundest landing and she slips back on her heel and falls on her bum! Never mind JLo, you can go flying and still look good!

Hahahaha. Sorry. Bieber falling. It’s funny. Especially since it was the teeniest trip ever, and for the rest of the song he was rubbing his leg as if it had snapped in half and looking backstage as if to say “DO SOMETHING. MY LEG HURTSES!” to his entourage. They might be able to carry you along the great wall of China Biebs, but they can’t carry away pain!

Katy Perry happily leaps into a ginormous pink cake as she is fun and silly and does those kind of things, but what she doesn’t account for is how slippy icing can make a floor, and it takes the cake – lol – when she gives up trying to get up and just lies on the floor laughing. Textbook Katy!

Taylor Swift went flying a couple of years ago as she danced around the stage – luckily it was during a break in her song so no harm done, but even so - might be worth sticking to slow songs about break-ups Taytay?

This is probably the most embarrassing. Ed Sheeran is really, really getting into the song and rocking out the way no sensible performer should – including leaping from one stage block to the other and gravely misjudging the difference. It’s a shame, because we love him, but it’s still funny.

Lady Gaga is the queen of performances and is known for her obscenely enormous shoes – so we are not at all surprised that she fell in the way that she did. After her piano stool fell out from underneath her, she fell about as funnily as a person could fall – legs in the air, a little "oof!" sound of surprise, the whole shebang. She owns it though, because she owns the stage. Go Gaga!

BONUS: Poor, vomming Lady Gaga. Absolute kudos to this dancer for his powers of misdirection when she starts chundering though!

Which is your favourite celebrity stage fall? Have we missed any good ones out? Tweet us @sofeminineUK!