Megan Fox and Brian Austin Green are expecting their second child. The couple welcomed a son into the world just 10 months ago and are delighted to be bringing little Noah a younger sibling. Cute!

Megan Fox and her husband Brian Austin Green have announced they are expecting their second child.

A representative for the 27-year-old actress told the New York Post: "I can confirm Megan is expecting her second child with her husband Brian.

"They are both very happy."

The pair welcomed their first child, a son named Noah, into the world 10 months ago.

The couple kept his birth a secret for two weeks but eventually confirmed it on Facebook.

Megan wrote: "We are humbled to have the opportunity to call ourselves the parents of this beautiful soul and I am forever grateful to God for allowing me to know this kind of boundless, immaculate love.

"Thanks to those of you who wish to send your positive energy and well wishes."

Clearly loving her life as a parent, since Noah's birth Megan has spoken of her desires to have more children.

She told Marie Claire earlier this year: "All I wanted to do my whole, whole life was have a baby and, now, I've finally done it.

"I just want to give Noah as much of myself as I can. And I want to have more kids. That is where my heart is."

They were on-off and engaged twice before tying the knot in Hawaii in 2010.

This will be Megan's second child but Brian's third - he has an 11-year-old son Kassius from his previous relationship with Vanessa Marcil Giovinazzo.

Back in December the Transformers actress spoke to Ellen DeGeneres about Noah's familial resemblance.

"He was his identical twin when he came out [but] recently he's been getting chubbier and everyone's like, 'Oh, he's so chubby - now he looks like you.'

"I don’t know how I should take that." 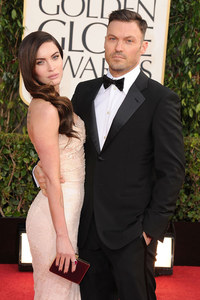