Michael Douglas and Catherine Zeta-Jones split: Couple "on a break"

Another A-List couple bites the dust. Catherine Zeta-Jones and Michael Douglas have been together for what feels like forever, but now they've reportedly decided to separate. The couple are said to be spending time apart, though neither has filed divorce papers - yet.

Michael Douglas and Catherine Zata-Jones are said to be taking a marriage break.

The couple, who wed in 2000 at Manhattan's Plaza Hotel, have decided to spend some time apart.

A source told the new issue of People magazine: "They're taking a break."

Neither party has officially filed for divorce.

​The pair haven't been seen together in public since the 40th Annual Chaplin Award Gala at Avery Fisher Hall in New York back in April.

Michael, 68, is currently on holiday in Sardinia, while 43-year-old Catherine is at home in New York with their children Dylan, 12, and 10-year-old Carys.

The Hollywood stars' relationship came under pressure in recent years after Michael was diagnosed with throat cancer.

Back together? Catherine Zeta-Jones and Michael Douglas reunite
Here’s some fabulous news to ring in the New Year - Catherine Zeta-Jones and Michael Douglas might be giving their marriage another shot! It’s been four months since the power couple announced their split, but to our delight the former lovebirds have finally stepped out together for the first time in what appeared to be a family reunion.

Fortunately, he beat the disease, but Catherine was diagnosed with bipolar II disorder in 2011.

The Welsh star was treated in a mental health facility in 2011 but had to receive further treatment earlier this year.

A friend said: "The stress has taken a toll on their marriage."

But just last month Catherine was asked the secret to her 13-year union - and she showed no signs of heartbreak.

She answered: "Respect, space and a sense of humour. We spend a hell of a lot of time together, so we are careful to maintain our space.

"We recently had an extension built, to house a closet. I go in there and never come out.

"My husband knocks on the door and says, 'Can I come in?' But I've got a TV in there, and my daughter brings her friends in - they play shop, put on all my stuff. I could be in there for the whole day, happily." 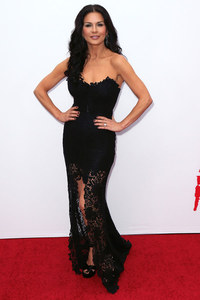 Esme Riley
…
break-up
From hair ideas to outifts, look no further for your daily inspiration